Continuing the book reviewing series centered on C.S. Lewis’ The Chronicles of Narnia, we now advance onto the better-known second novel published in 1950: The Lion, The Witch, and the Wardrobe.

In a nutshell: World War II is fully raging, and four children named Peter, Susan, Edmund, and Lucy (from eldest to youngest) are sent away from London (because of air-raids) to Professor Kirke’s home in the countryside. Edmund is known to be the more argumentative and resentful of the lot, and believes himself superior than his older brother, Peter. One rainy day, Lucy sneaks inside a large wardrobe that leads her to another world named Narnia. This land is in a perpetual state of winter (but never Christmas) due to the heartless Queen/Witch Jadis, the self-proclaimed ruler. Eventually, all four siblings end up in Narnia at once, and they find out about a prophecy – which states that two sons of Adam and two daughters of Eve will arrive, defeat Jadis, and become the rightful Kings and Queens of Narnia. Edmund lets himself be tricked by the Witch, and the other three siblings travel, with a married pair of talking beavers, to find Aslan and his army at the Stone Table. Biblical references ensue.

I must say, I enjoyed the prequel The Magician’s Nephew just a bit more based on the following factors: pace and character development. The Lion, The Witch, and the Wardrobe seemed almost like it was desperately rushing through the plot. Lucy walks inside the magical wardrobe, accidentally finds herself in Narnia, meets Mr. Tumnus, the faun, who immediately tries to trick her then confesses his alliance to Queen Jadis, and ultimately helps Lucy get back home safely all in a five-paged chapter. Yes, it is a short moment and it keeps the plot moving, but it would have felt less rushed if it had taken place a few chapters later. At least for one as a reader to know more about the four siblings and how they felt before Lucy goes into the wardrobe; for their interactions and personalities to feel real. For instance, I barely remember anything too memorable about Susan as a character other than how she nonchalantly agreed to almost anything, and how she almost fainted when she encountered the giant wolf Maugrim. She seemed almost void of personality, if you will.

Another small problem I had with this novel is the way Aslan moved. Alright, I am aware that sounded odd, but hear me out: there is a moment where Aslan actually claps his paws together, another where he holds Peter’s sword with his right paw, actually sits on a throne, and is apparently a biped.

One of the key moments in The Magician’s Nephew was Aslan’s first appearance as he creates Narnia; he held this fierce wildness about him along with nearly overwhelming nobility and power. Imagining a lion that moves around like a human does not exactly seem to fit in the category of what Aslan is supposed to represent. If anything, it reminds me of the Disney animated version of Robin Hood where Prince John was portrayed as a scraggly anthropomorphic lion, or the Disney sequel The Lion King 2: Simba’s Pride where two lions and other animals literally stood up on their hind legs and danced in a conga line. 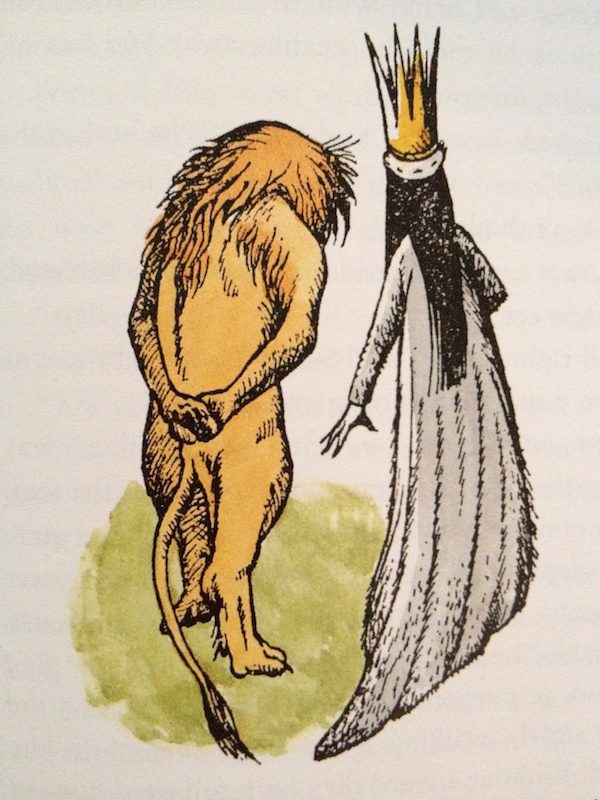 The strongest quality of this book was the actual story and the descriptions. One of the best-described scenes – or my favorite one to slowly paint in my mind – takes place as the Witch’s power begins to fade and the previously frozen and bitterly cold land of Narnia thaws. Bubbling streams, singing birds, the smell of fresh grass, blue skies, a light breeze, and the Witch’s growing distaste and panic. I loved the contrast between that warm, clearly inviting world and the almost black-and-white harsh one we witnessed in the beginning of the novel. I mean, look at this little chunk and tell me it doesn’t make every bit of you crave springtime:

“There was no trace of the fog now. The sky became bluer and bluer, and now there were white clouds hurrying across it from time to time. A light breeze sprang up which scattered drops of moisture from the swaying branches and carried cool, delicious scents against the faces of the travelers. The trees began to come fully alive. The larches and birches were covered with green, the laburnums with gold. Soon the beech trees had put forth their delicate, transparent leaves.” 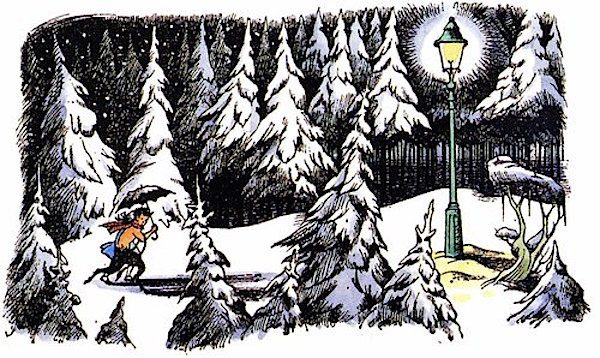 Don’t get me wrong, there are many more enjoyable moments in The Lion, The Witch, and the Wardrobe. I also appreciated the fantasy and the more serious tone that went into the writing. My issues are merely nitpicks out of what is a good novel overall, but was missing a few more bits to make it reach its fullest potential, which is why I will assign it a 4/5 stars.

Upcoming reviews of The Chronicles of Narnia: