“You’re just a typical fifteen-year-old sophomore, an average guy named Kyle Chase. This can’t be happening to you. But then, how do you explain all the blood? How do you explain how you got here in the first place?”

When I first began this book, I thought that this was going to be one of those novels that doesn’t list the name of the protagonist for the entire novel. (Which, is a cool element to a story in my opinion). Even though Charles Benoit’s You isn’t like that exactly, (we learn our main character’s identity within the first couple of pages) I found this YA novel to be unlike anything I’ve ever read, storytelling wise.

We follow 15 year old Kyle as he goes through the everyday, same old, same old motions of his life: listening to the nonstop bickering of his parents, (especially his mother who just seriously won’t lay off) the mundane and pointless moments he spends with his group of terribly unmotivated and typical hormonal teenage boy friends, (known at their school as ‘hoodies’ because all they wear is, you guessed it, black hoodies), and what’s most important to Kyle, his fascination and love for Ashley, the girl that just always seems to be out of reach. (I don’t care much for Ashley because she was a little too ‘Valley Girl’ for me, but more on how that relates to the plot later on.) 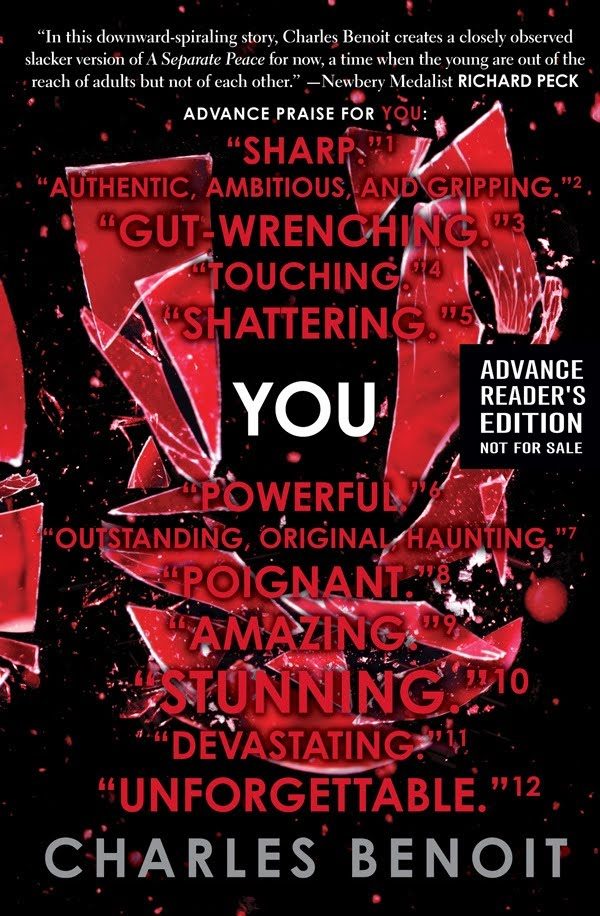 With only 240 pages, You reads very easily and it’s been one of the few novels recently that I kept going back to. The first page is a definite reading hooker (weird, but I wasn’t sure how else to say that) and I can tell the author spent some time on getting the emotions and scene of the event in the first few pages just right.

If you have had to endure the pain and uncertainty that is public high school, I think you’ll most definitely relate to this novel. Kyle comes from a good home: his parents are still together, he gets along with his young and adorable kindergartner sister, Paige, and nothing too viscous or traumatizing happened to him during his childhood.

However, he’s a true loner, both intellectually, emotionally, and a majority of the time, physically, too.

What I liked most about Kyle and the way Benoit created him was that he seems so real. Real enough that most of us, after reading this story, can probably picture someone very similar to him that we saw walking alone in the halls at school. He’s also a regular guy with inner demons like all of us. This novel reflects the small and large choices that he decides to make (or not make) and the dire consequences of those.

The only thing I didn’t particularly enjoy about Kyle’s story was that Ashley was a part of it. Reflecting back after finishing the novel a few days ago, I realize that she’s much more a symbol of perfection and idealism rather than an in-depth character to connect with. Ashley and Kyle have known each other for years, and she always calls him to dish about each and every aspect of her teenage life. While she can freely reach Kyle, he, on the other hand, is always at a loss with how to really reach her. Her personality was too stereotypical for me (she falls for guys way too easily, is always wanting to be on the ‘in’ crowd, and she just strikes me as someone who wouldn’t have Kyle’s back when he needs her the most.)

Another character I despised was Zack. Man, oh man was this guy something else. Think a more laid-back version of a YA sociopath. That is Zack rolled up into a few sentences. (He’s not a character that needs to be talked about too much in a review; he needs to be read about and experienced).

I would completely recommend this riveting novel (it’s a quick read!).

Books Similar To You: