In the past, Disney’s track record in the authenticity department has a few (read: many) problems. The Grimm brothers would not recognize their stories (although little, little kids probably don’t need to know  right away that Cinderella‘s sisters cut off their heels to fit the shoes and later had their eyes pecked out). Jasmin in Aladdin looks and acts nothing like a princess in the Muslim culture would. Pocahontas may as well have not been made, as beautiful as the songs are, for all the inaccuracies in the animated film.

So when you have a Disney film like Beauty and Beast depicting an ostracized bookworm, we have reason to wonder. Anyone can say they love books, but how do we know that Belle is the genuine bookworm article?

1. She Reads Really Fast And Reads The Same Book Over And Over

Finishing a book in one day. What bookworm hasn’t been there at least a couple times?

And it doesn’t matter how many times you read your favorite book, you will willingly revisit it over and over again. Belle gets it.

2. She Reads And Walks Without Running Into Things

Starting at 2:19, look at how she jumps rope, avoids the water, and walks around town without skipping a beat in the book. That kind of multitasking and maneuvering takes talent.

Not all bookworms are loners or “odd,” but we do appreciate our alone time and enjoy talking with other bookworms. If you don’t know any other bookworms, it can be lonely.

Although she is much nicer to Gaston than most of us would probably be, you can see the look of disgust on her face. I’m fairly certain she would have said no just for putting his nasty, dirty feet on her book. Deal breaker, dude.

5. She Dreams Of Book Plots Coming True In Her Life.

Living vicariously through books is practically a bookworm requirement, and Belle sings an entire song about it. Check.

6. She Uses Words Others Don’t Know.

Gaston, get a dictionary. 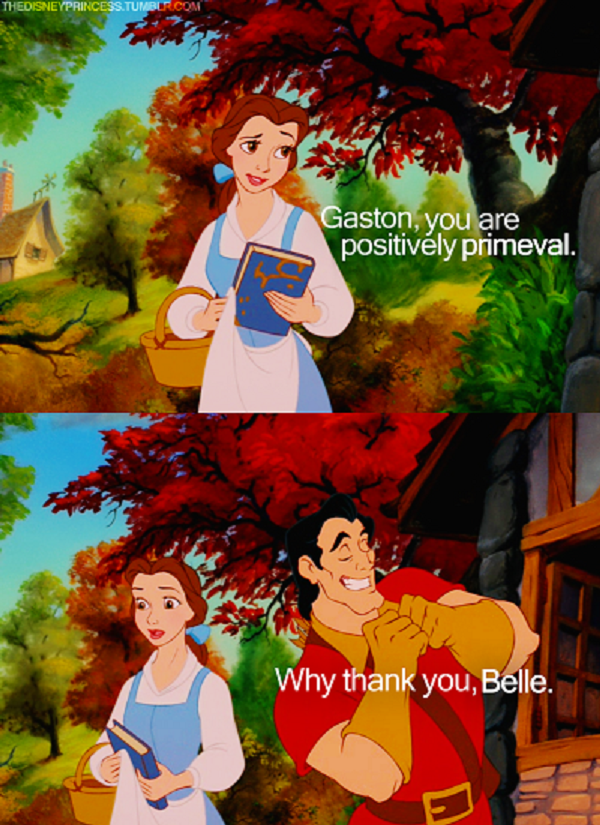 7. She Stands Up To Powerful Men When She Disagrees With Them

Belle defends her father’s reputation (at 2:40) and refuses the proposal of the most popular man in town. Belle has her own mind and speaks up when she needs to.

As if all that weren’t enough, Belle stands up to a huge beast. This girl has got moxie to argue with a guy who could easily tear her face off.

What I find interesting in this scene is that while she has the courage to prove her point to an intimidating person, she is also smart and humble enough to express gratitude for what he did for her. Because of her actions here, Belle and the Beast connect for the first time.

Towards the end of the film, she defends the Beast in front of the whole town and insults Gaston. This girl ain’t afraid to take on injustice!

8. She Is Curious About The West Wing And Questions/Challenges The Rules

Belle just can’t curb her curiosity. She asks why and can’t shake what might be in there. Curse you, bookworm imagination!

She almost seems dizzy with excitement as she looks around the library. Although she had already started liking the Beast, he captured her heart then and there.

Did I miss anything? What are other signs of being a bookworm?