Being trans in comics has usually been a function of robotics, shapeshifting, spells and curses, etc., instead of a facet of gender identity of the character. However, trans women are showing up as themselves more and more in comics, especially from Image Comics who have been doing a great job.

1. Sera of Angela: Asgard’s Assassin by Kieron Gillen, illustrated by Marguerite Bennett, and created by Neil Gaiman and Todd McFarlane

Sera is probably the closest character we’ve got to a transgender woman superhero. Sera grew up as an Anchorite, which is the group of male Angels. She says that she was “never their kind” and when she saw Angela, the main character, fighting, she helped her, and joined her on her adventures.

Sera has great backstory, is not a tragically murdered trans character, and kicks some serious a**. She also has a very happy and cute queer relationship with Angela. 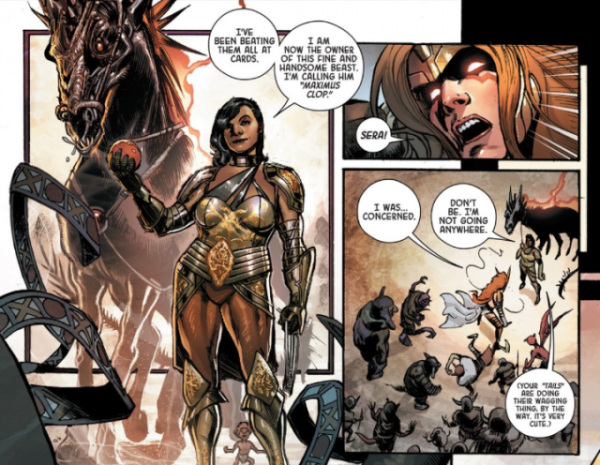 Lumberjanes is a very critically acclaimed series originally authored by Shannon Watters, Grace Ellis, Noelle Stevenson and Brooke A. Allen that’s won both the Eisner and Harvey awards and sold over 65,000 copies of its first trade paperback in the first two months. This very popular and very feminist comic also has an openly trans woman leading character. Lumberjanes is an all-ages comic about friendship and solving supernatural mysteries at Miss Quinzella Thiskwin Penniquiqul Thistle Crumpet’s Camp for Hardcore Lady Types, and Jo comes out as trans to a boy who’s been hanging out with the Lumberjane girls. 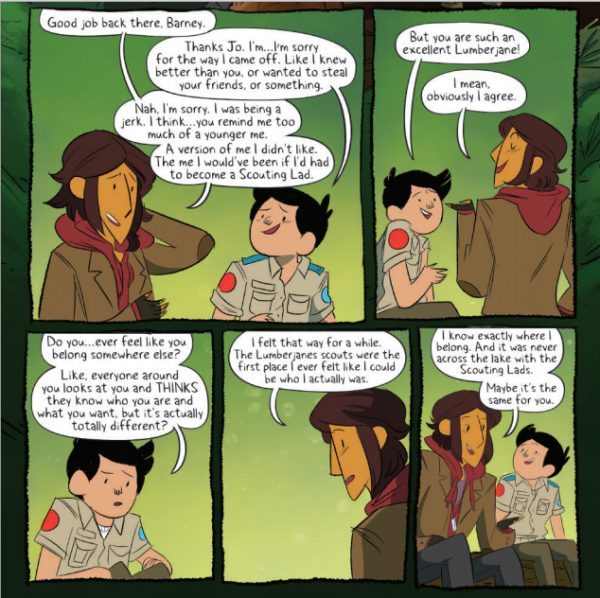 3. Prill of Witchy by Ariel Ries

I want to read this gorgeous Asian fantasy comic by Ariel Ries’ so badly. In the kingdom Hyalin, magical power is determined by the length of your hair, but if your hair is found to be too long, then you are deemed an enemy of the land and hunted. Prill is a tall, long-haired trans witch who’s the school’s resident mean girl and later becomes a friend to the comic’s protagonist, Nyneve. 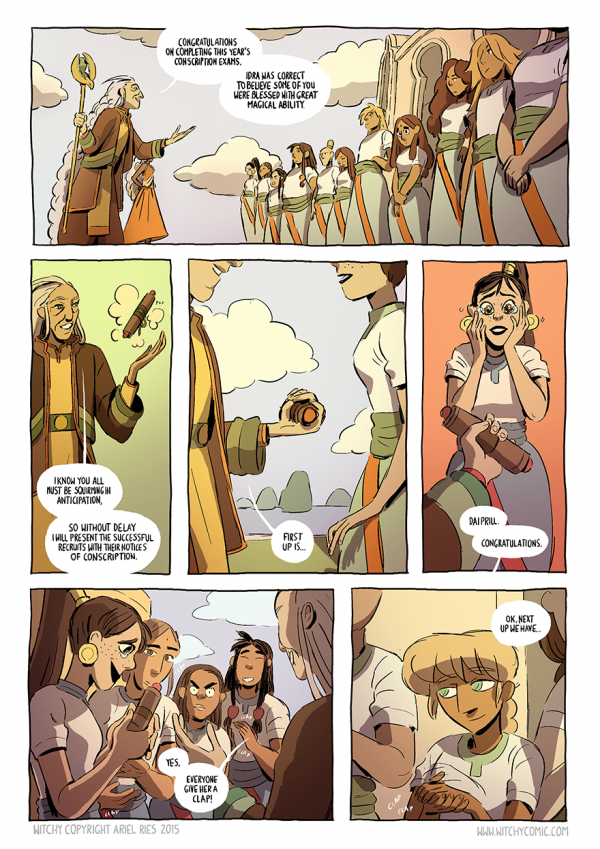 On April 10, 2013, in Batgirl #19, Alysia Yeoh, Batgirl’s bisexual, Singaporean-American activist roommate came out as trans. Alysiah is a well-rounded, opinionated character, and her coming out as trans to Barbara (Batgirl) is treated as a normal moment of sharing between friends. This moment marked the first time we saw a non-fantasy, non-science fiction, human trans character in a non-mature, mainstream comic book. The writer at the time, Gail Simone, was worried about backlash. There was some, but Alysia became a fan-favorite character. When Simone left the book, they tried to bench Alysia, but fans demanded she come back. 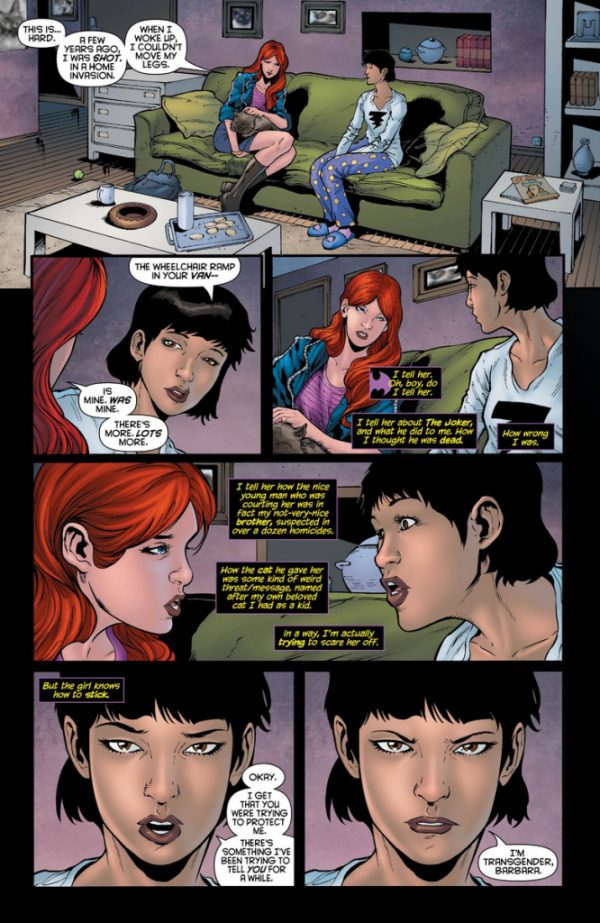 5. Cassandra of The Wicked and the Divine by Kieron Gillen

Cassandra was formerly a reporter who was interviewing members of the pantheon of young celebrity gods and goddesses. She’s all over unimpressed, skeptical, and cold-blooded. Now that she’s Urdr, a goddess of that pantheon, she’s still just as salty and sharp, but also a goddess. And she’s trans! 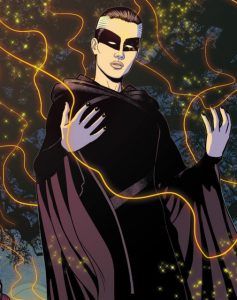 6. Mackenzie of Agents of the Realm by Mildred Louis

Mackenzie is not the main character of this brilliant webcomic by Mildred Louis, but she is a main love interest. Jordan is trying to woo her, and all of Jordan’s friends are encouraging Jordan. Mackenzie’s desirability as a person and a main love interest makes her fairly unique in the world of trans characters in comics. 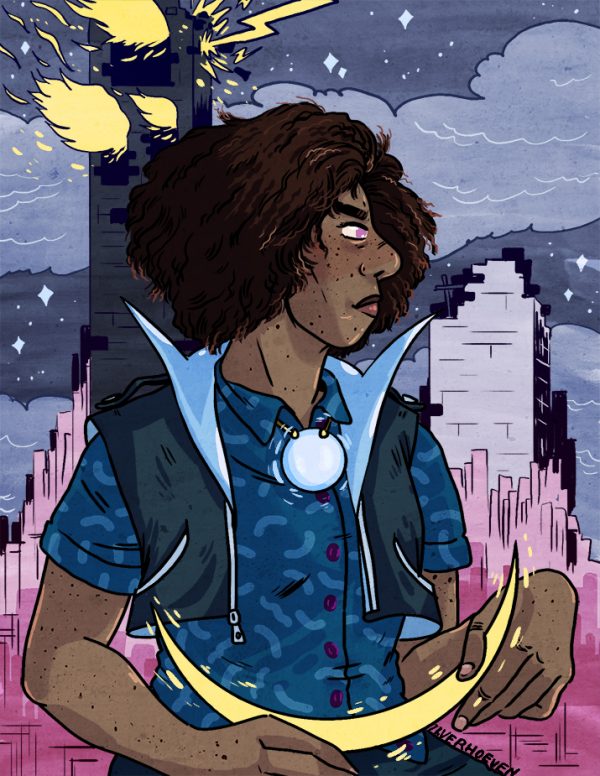 Source: Agents of the Realm

Trans women are finally getting a chance to shine in comics. There are so many more characters and comics out there, especially if you look to independent authors and artists.

If you want to know more, there’s a really great write up on the history of trans characters in comics at Autostraddle.