Not to be outdone by the original, Katherine Neville’s sequel to The Eight, The Fire, takes the reader on another ride across continents, cultures, religions, and centuries. The page count to The Fire is nearly as daunting as its predecessor, topping off at just over 440 pages.

The second story picks up 30 years after the events in The Eight, following the children of Catherine Velis and Mireille, the French nun of Montglane Abbey, in paralleling timelines.  After defeating the White team and scattering the pieces of the Montglane chess service in an attempt to end the game, Cat believes her family is safe from its dangers forever. But years later, things take an unexpected turn when her husband is shot in Russia under mysterious circumstances. Despite her daughter, Alexandra “Xie” Solarin’s prodigious aptitude for chess at an early age, Cat forbids her to play the sport after his death. 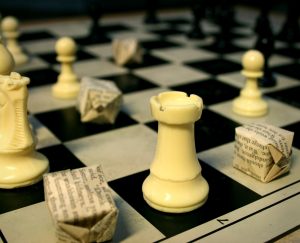 Thirty years later, “The Game” is once more afoot. Never having learned of the mysterious chess service that brought chaos to the world and her mother’s involvement in preserving its secret, the unwitting Alexandra has been suddenly thrown into a deadly quest for control of the board. She uncovers clues, secrets, and an ancient artifact crucial to the game while navigating government agents, opposing players that will kill to possess the pieces, and a mysterious person from her past whose loyalties are hard to decipher.

Interspersed with the modern day tale of Alexandra is the tale of Charlot, Mirelle’s son who possesses “the second sight.” He helps his mother in her quest to uncovering the purpose of the infamous chess set, trekking across the barren Arabic lands of its origin. It is during his quest that the true black queen is uncovered, and the secret power of the service is revealed. However, by taking this power for himself, he perpetuates the continuance of the deadly game instead of fulfilling the destiny of his birth and using the formula of the service for its intended purpose. 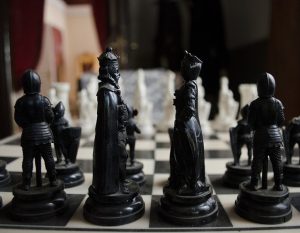 For me, The Fire lacked some of the character depth that made The Eight a page turner. Having fallen in love with Catherine Velis’s character, it was disappointing to find the strong and crafty protagonist’s daughter in the lead role with an almost dimwitted mentality. Additionally, it lacked some of the action that made the first book such a hit. Because of this, it was a bit harder to read, but in the end, it didn’t fail to live up to Neville’s other high caliber work.

And, despite my disenchantment for some aspects of the sequel, Neville still outdoes herself as she brings history’s most notable characters to life, such as Ali Pasha, Lord Byron, Maria Hadfield-Cosway, Thomas Jefferson, and of course, original players from The Eight. With eloquent prose, vivid imagery, and detailed historical accuracy she writes her way through twists and turns that keep you guessing the checkmate until the final page.

Check out Part One, here!

Check out other books by Katherine Neville: