Flavia de Luce has the life so many bookworms have dreamed of – a childhood in a rambling, overgrown English estate filled with curiosities and surprises left behind by ancestors of yore. Of course, this is ignoring the fact her mother is absent and her two sisters are supremely annoying, but that setting seems like it can take away a lot of those depressing factors.

As the protagonist of Alan Bradley’s mystery books, Flavia is a spunky, precocious, independent chatterbox of a girl. She is obsessed with chemistry and has no qualms about putting herself in unsettling and dangerous situations. Heck, in Speaking From Among The Bones, Flavia is incredibly excited to open a tomb! Flavia is, in short, what I wish I had been as a child and what I fear any daughter of mine will be. Spunky and independent is fine, being willing to traipse about among corpses and explode things in a laboratory is not any parent’s ideal, thank you very much. Although, who among us doesn’t wish we had this kind of confidence as a child:

“I was me, I was Flavia. And I loved myself, even if no one else did.”

(From The Sweetness At The Bottom Of The Pie) 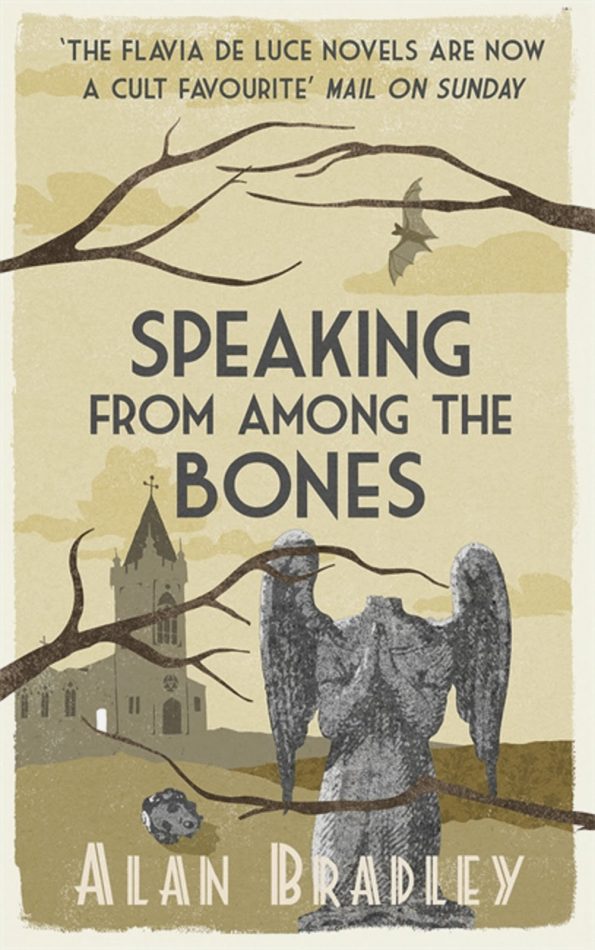 Perhaps it is in how she copes with some of the most upsetting situations a child can imagine – not having a mother present, for example – that Flavia’s appeal lies. She copes with it through creating stories, learning more, and taking it upon herself to solve the problems that arise. She is undoubtedly a handful, as certain children are so often described, but she tends to have people’s best interests at heart. We learn this through her unending internal monologue that more often than not is how the stories of the series get told. To see a mystery unfold through a child’s eyes is quite interesting, and I thank Flavia for her interpretations that help me, the reader, to stop for a beat, think about the situation, and recognize what she is talking about. It is two types of interpretation – British to American and child to adult(ish).

But Flavia crosses this divide well, and she does it often with observations that strike to the heart of everyone who was a slightly different child, or preferred adults to other children, books or school to fun, had annoying siblings, or simply ever felt misunderstood.

Take, for example, this quote from A Red Herring Without Mustard, which so simply and strongly conveys a feeling many children have about their existence among adults:

“…because I was only eleven years old, I was wrapped in the best cloak of invisibility in the world.”

While her precocious knowledge, abilities, and perceptions make her caustic at times, particularly towards her sisters, it is hard not to love Flavia. She is a strong child who will no doubt grow into a strong woman, and her sense of humor can’t be beat. She overcomes difficult circumstances by using her brain, and her existence in the pages of books gives us all something to smile about.

From her first adventures in The Sweetness At The Bottom Of The Pie to her international escapades in As Chimney Sweepers Come To Dust, Flavia never fails to disappoint, and this reader is confident she’ll continue to please in the upcoming Thrice The Brinded Cat Hath Mewed.