Calvin and Hobbes is the eternal, classic comic that everyone seems to have read as a young child. However, aside from being incredibly funny and entertaining, it is also one that teaches us a series of valuable life lessons. Although we don’t think of  Bill Watterson’s brain child as a serious or profound comic, there are many life lessons that can be drawn from Calvin and Hobbes‘ adventures. Here are 5 that I’ll never forget:

One of the worst feelings in the world is when you have to deal with a bully you simply can’t overcome. Normally, most bully stories end with the underdog outsmarting his or her adversary and finding a way to beat them. But in this story, there is no such ending and the result is somewhat depressing. In the comic strip below, Calvin has his toy truck stolen by the local school bully, Moe. The story ends with Calvin wandering off with his usual buddy Hobbes, but with no truck. The lesson here is that sometimes the bad guy wins. Not every story in your life is going to have a happy ending. Sometimes the bad guy wins and part of life is learning to cope with that. If there is one positive takeaway from Calvin’s tale it’s that having a buddy like Hobbes makes all the pain of the real world go away.

This series of strips brings tears to even the most crying averse individuals out there. In this series, Calvin discovers a raccoon that is barely clinging to life. His family attempts to save it, but to no avail, and the raccoon eventually dies. This spurs a series of reflections from both his mother and Hobbes about the fragility of life. Of course, Bill Watterson ends the series with a promise between Calvin and Hobbes swearing not to leave each other any time soon. Although certainly not everyone’s first exposure to death, this series of comic strips is different from a typical exploration of the topic. Calvin and Hobbes taught us lessons on empathy, and just how quickly things on Earth can end for us all. Although he doesn’t lose anyone close to him, the death of this raccoon forces him to confront the tough topic head on.

As an adult, compromise is something you learn to live with, but never learn to love. This lesson was first taught to me by Calvin when he is attempting to design his poster. While partnering with Hobbes, the two come into conflict over how to split the prize money. Should the majority go to Calvin who came up with the idea, or Hobbes who did the manual labor? There are greater philosophical arguments to be drawn from this debate, but the point is that at some point they agree on a classic 50/50 split. This leads Calvin to remark: “everyone hates a good compromise.” Boy did I find out that was true later in life! Whether it’s in a professional or personal setting, compromises aren’t the best of both worlds. Instead, as Calvin teaches us in this instance, more often than not, they wind up being the worst of both sides.

A recurring theme throughout all of Calvin and Hobbes,’ shall we say misadventures, is that there is something fascinating about everything. There is wonder in the most insignificant details on our planet, we need only be willing to look at our surroundings through the right lens. Whether its blasting off into space in the middle of class, or transforming a simple cardboard box into either a transmogrifier or time machine. Calvin teaches us adventure can be found in the most mundane places with the most mundane things. It merely takes imagination and the right combination of people. Even in adult life, I find that the boring situations can be somewhat alleviated by allowing your mind to wander, or having a good conversation. In fact, perhaps what makes Calvin’s adventures so wonderful and magical is the fact they are all undertaken with his best friend not far behind him. There is no question then how Calvin is able to find such wonder in the world. 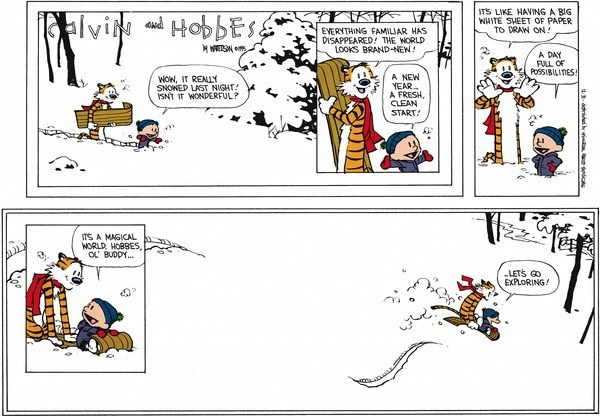 5. Good Friends Make All The Difference

The past few points have been dancing around this last one, but we’re finally getting to what I would call the most prominent part of Calvin and Hobbes‘ comicstrip: friendship. The relationship between Calvin and Hobbes is truly special as evidenced by, well Watterson’s entire body of work. What makes the strip special and all of their crazy adventures so memorable is that they have each other in all of them. Thus the last and most important takeaway from Calvin and Hobbes is that it’s not always the where, it’s the who. The people we surround ourselves with have such a huge impact on our lives and serve as a branch of how we interact with the world. Therefore it’s important that we be with people who can broaden our worldview and whose company we can enjoy. This life becomes more bearable and easier to get through when you have the right people by your side. Perhaps that’s really what Watterson was driving at when he made these characters. The world might be a terrible place to live in, but with the right friends, it doesn’t matter; even the worst of life becomes filled with magic.

Source: Richard On The Web