A long-standing opponent of President Trump, J.K. Rowling has devised the perfect plan for British citizens to “show support” for the American leader during his visit to the U.K. in the fall.

This comes as a response to Trump’s highly controversial tweets about the recent terrorist attack in London, which, as Press Secretary Sean Spicer has stated, should be considered “official statements by the president of the United States.”

Rowling’s plan centers on holding Trump accountable for those tweets and allowing Brits to demonstrate their…appreciation…for the American president: 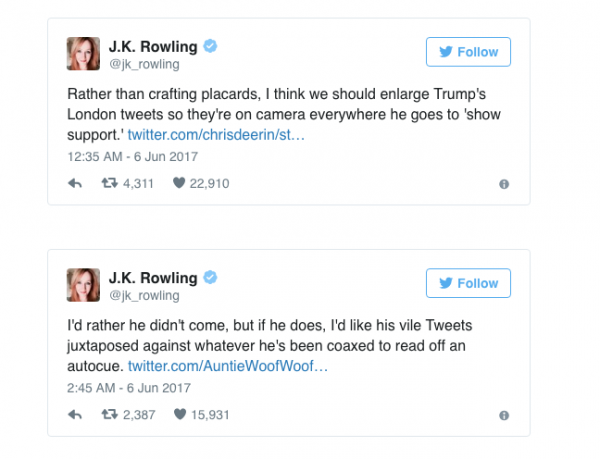 Of course, this is all assuming that Trump’s visit isn’t cancelled altogether. In addition to nearly 2 million Brits who have signed a petition demanding that PM Theresa May cancel Trump’s visit, London Mayor Sadiq Khan has insisted on more than one occasion that Trump not be invited to the U.K.

The first occasion was the announcement of Trump’s infamous travel ban, which Khan denounced as “cruel and shameful.” But after Trump’s reaction to the London terror attack, Khan has once again stated that the president’s visit must be cancelled.

Trump not only seized on the London attack as an opportunity to promote his travel ban, but also made specious allegations regarding Khan’s handling of the attack. According to CNN, Khan told Londoners that the increased police presence in the city was “no cause for alarm.” Trump, of course, omitted those pertinent facts in his Twitter statement:

Since then, Khan has spoken out against Trump’s actions: “When you have a special relationship, it is no different from when you have got a close mate. You stand with them in times of adversity, but you call them out when they are wrong.”

What do you think of Rowling’s plan? Should Trump’s visit be cancelled? Share your thoughts below!