Life is full of mystery and intrigue. If you’re looking for it, look no further than the ancient texts and writings that have been stumping historians since their discovery. Within the pages of each of the historical texts listed below you’ll find magic, ancient culture, human sacrifice, occultism, and mysterious codes and ciphers.

1. The Book of Soyga (Aldaraia)

The Aldaraia, whose significance was said to have been revealed to Adam in Paradise by angels and only able to be interpreted by the archangel Michael, was originally owned by Elizabethan scholar John Dee. The Book of Soyga is a Latin treatise on magic and was thought to be lost after Dee’s death until two were uncovered in 1994 – one in the Bodleian Library and the other in the British Library. The book contains incantations, instructions on magic, astrology, demonology, lunar mansions, and names and genealogy of the angels. The book also contains 36 tables of letters which to this date have yet to be completely deciphered. 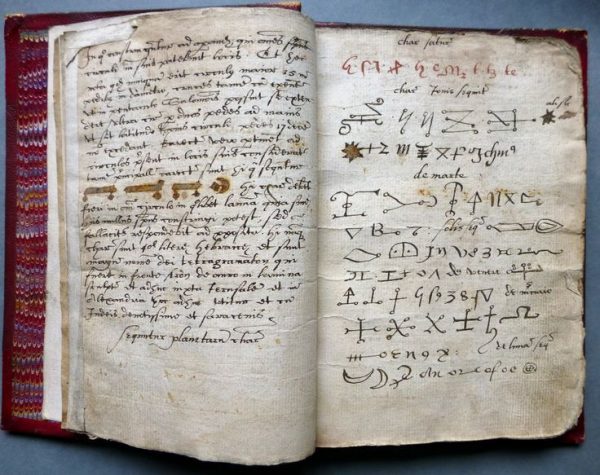 Written by Conrad Lycosthenes in 1557, the Prodigiorum Ac Ostentorum Chronicon (say that 10 times fast) was a collection of omens and portents with pictures of various creatures, both real and mythical. It features sea monsters, a Griffin, and human-like beasts that were headless or had faces on their chest. This book, strange as it is, could have been an inspiration for the works of Nostradamus. 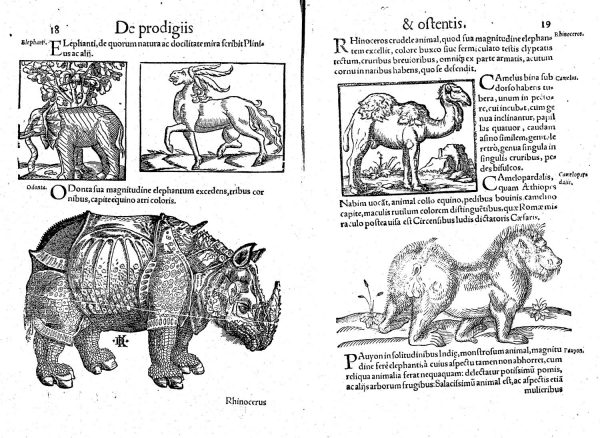 Named for alchemist Sir George Ripley, who spent more than twenty years traveling Europe to find the secrets of transmutation and immortality, The Ripley Scrolls contained pictorial cryptograms that were purported to illustrate the production of the philosopher’s stone (the elixir of life). Many believed that he had found it, as it was rumored that the money he gave to help fund the war against the Turks were made from base metals he had transmuted into gold. Although the original scroll was lost, 21 copies remain in places throughout the world, including the Bodleian Library. 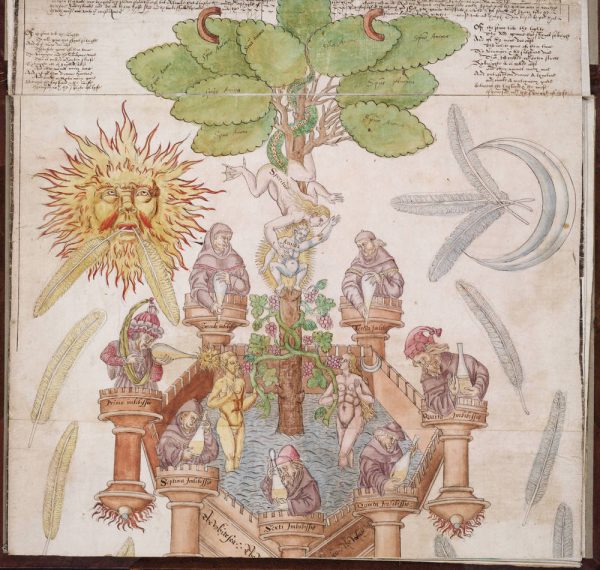 4. The Story of the Vivian Girls by Henry Darger

The mystery of this book actually surrounds its author. Henry Darger was a typical Chicagoan who worked as a janitor for a local hospital. He was born in 1892 and died in 1973. After his death, former landlords were cleaning out his apartment and discovered a massive, 15,000 – page tome that Darger had hand-written, ostentatiously titled, The Story of the Vivian Girls, in What is Known as the Realms of the Unreal, of the Glandeco-Angelinian War Storm, Caused by the Child Slave Rebellion. The novel features mixed media illustrations, with haunting images of martyr children in various states of mutilation and contains underlying themes of transgenderism – many images of the girls are portrayed with penises, when partially or fully unclothed. His work is said to epitomize outsider art. 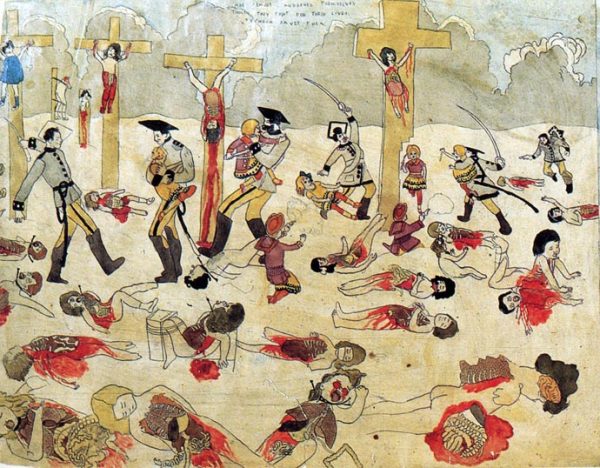 This ancient text is truly a mystery. It surfaced in Hungary during the early 19th century but may have been written in the 15oo’s. Nothing is known about this book – not its author, purpose, or even its language. Since the book’s discovery, scholars and linguists throughout the world have tried to translate the codex to no avail. There is yet to be a widely convincing and accepted interpretation given, although theories abound. The book contains unknown symbols and illustrations of religious and military scenes which seem to indicate a society of differing religions (Christian, Muslim, and Pagan) in coexistence. 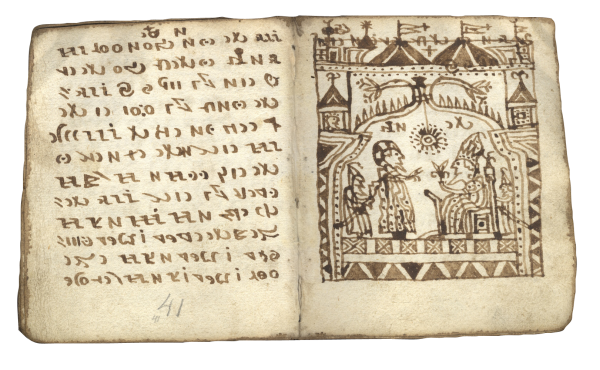 The Aztecs have always been a great source of fascination for anthropologists. From their calendar stone to ceremonial human sacrifices, the culture has an air of mystery surrounding it. The Codex Mendoza is no exception. Scholars call it the first “autoethnography” – a  form of writing that uses self-reflection to connect a person’s story to wider cultural, political, and social meanings   It is a journal, in traditional Aztecan pictograms, of rulers and the conquered, a ledger of tribute paid by the conquered, and Aztecan daily life. It was commissioned by Viceroy Antonio de Mendoza in 1616, with the intent of being sent to the Spanish king.  It was hijacked on its way to Spain and lost for a few hundred years, before resurfacing in the Bodleian Library. 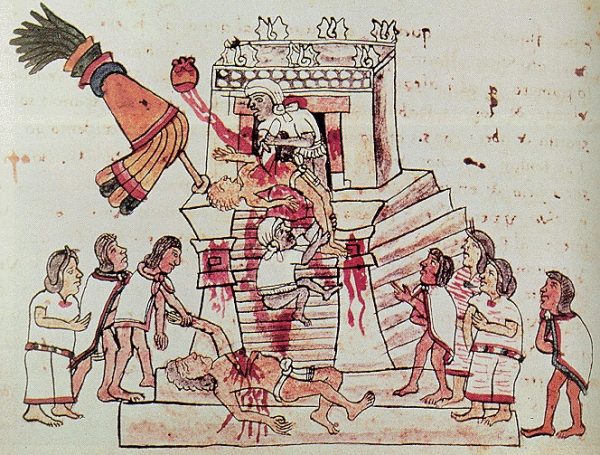 The Nag Hammadi Library is a group of 13 codices that comprise the Gnostic Bible. The library was discovered by two Egyptian farmers in 1945. The leather-bound parchments, written on papyrus, were discovered in a sealed jar and thought to have been buried after Saint Athanasius condemned non-canonical works in A.D. 367. The farmers intended to sell the manuscripts, but they eventually found their way to the Coptic Museum in Cairo, Egypt. The Gospel of Thomas, which is the most iconic codex, is estimated to have a composition date of 80 A.D. The discovery of these manuscripts are said to be a major influence on the study of early Christianity and Gnosticism. 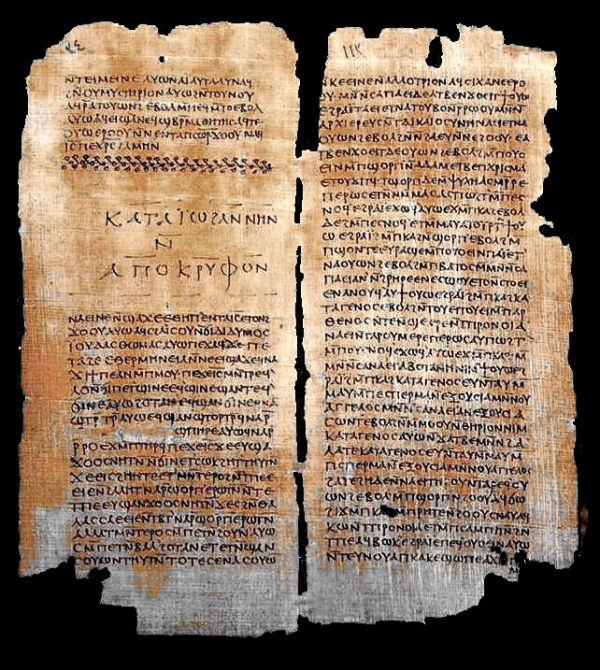 Containing a gathering of papal decrees and letters, the Smithfield Decretals were completed in stages. The text came first, with only a handful of illustrations. The owner of the manuscript commissioned several artists some 40 years later to complete the decretals with images, and the result is a series of bizarre and fantastical creatures littered throughout its pages. Although the decretals were at one time housed at the Augustinian priory of St. Bartholomew’s in Smithfield, London, (hence its title) its true origins are a mystery. 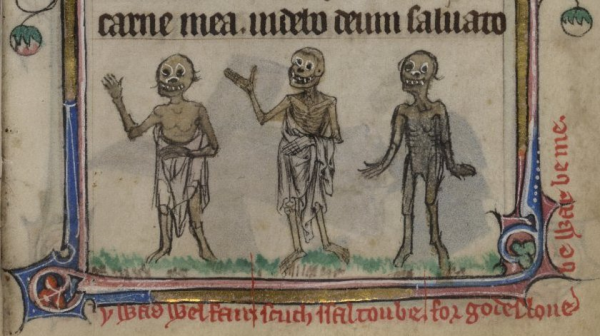 The Codex Seraphinianus is a cross between fantasy and surrealism and features unique and peculiar creatures and plants – fish that resemble an eyeball, bleeding fruit, cities ensconced in a giant oyster shell, and a pair of lovers morphing into an alligator (pictured below). The Codex was written by Luigi Serafini over the span of 30 months and contains 360 pages of undecipherable text. Linguists today have yet to interpret the mysterious language.

The mysteries of the mind make The Red Book a perfect candidate for this list. It was written by famed psychologist Carl Jung during a time of possible mental instability. Critics argue that Jung was experiencing “a creative illness, a period of introspection, a psychotic break, or simply madness.” The psychologist claimed that the prophet Elijah and Salome visited him and guided him through the process of delving into a “collective conscious.” Jung called this technique “active imagination” and the book’s contents are a product of this process.

For those interested in the occult, the Grand Grimoire is as mysterious as they come. The origins of this book are a mystery. Some editions date the book as early as 1421 but it may have been written in the early 19th century by Antonio Venitiana del Rabina, who presumably gathered information for the book from the original writings of King Solomon. It contains spells and rituals, as well as information on summoning demons and bending them to one’s will. 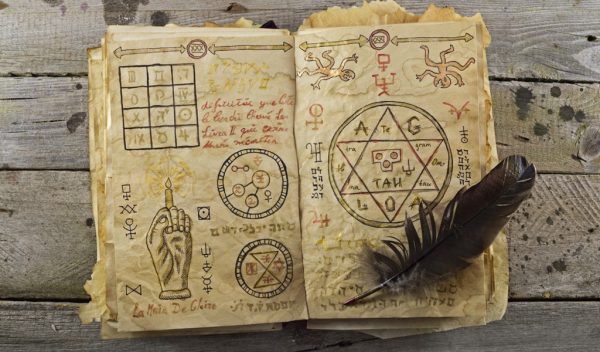 Interested in reading these books for yourself? Unless you’re quite wealthy, it is doubtful you can acquire these rare treasures, but despair not. Many of them have been translated and full PDF files can be downloaded and read at home. Share this list with your friends and find out if they have read any! 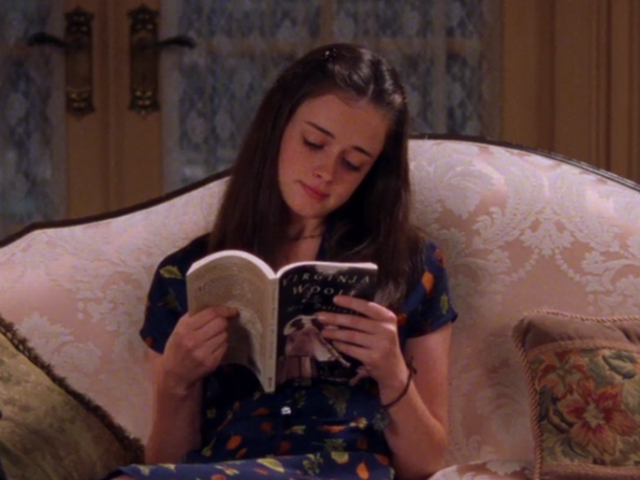