When I was a kid, I had one shelf that spanned the length of the biggest wall in my bedroom, and that’s where I kept my books. My beautiful, beloved, sacred books. Unfortunately, my younger siblings did not quite share this reverence for my cherished collection. At one point, I convinced my mom to put a little slider lock on the outside of my bedroom door, so that when I went to school I could lock it up and not worry about grubby little sister fingers trying to steal My Precious-es.

This didn’t actually help much. It seems slider locks are no match for kids who can drag step stools around. 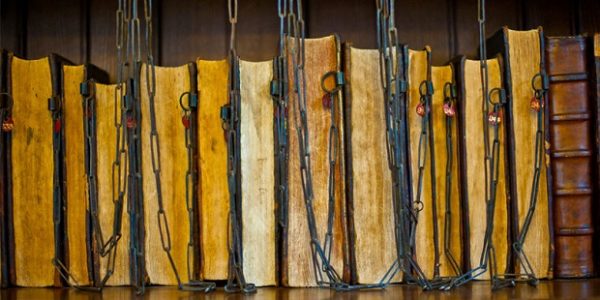 If only I had known about chained libraries back then! Sure, it would have involved more work than installing a teeny door lock, but the cool factor (not to mention safety factor) would have been through the roof!

Chained libraries were an invention of necessity. Obviously, books were scarce and incredibly valuable before the invention of the printing press. After painstakingly handwriting every word of a 1,000 page volume, the last thing the author would want is for that tome of his sweat and tears to disappear. And the last thing the library’s owner would want is to have to commission another copy. 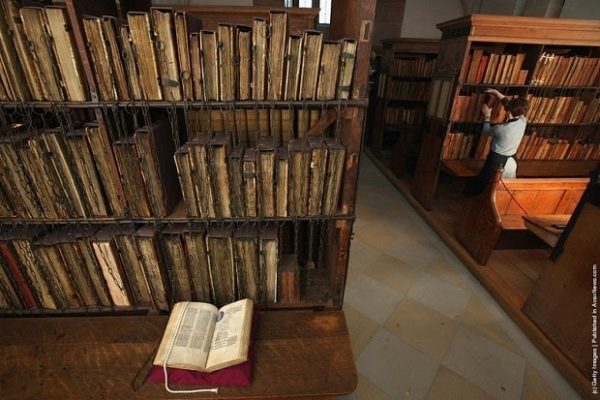 It wasn’t until the later years of the Middle Ages that public libraries became a thing, and safekeeping became a problem. The solution to this frustrating and costly problem was to chain the books to the shelves. In order to protect the bindings, the chains were usually attached with a small iron ring that pierced through the book’s cover. The chain links led to another, larger ring through which a long bar was threaded. The bar was, of course, locked to the shelf unit. All the books on one shelf were attached to this bar, and if the occasion arose where a book did need to be removed from the space, the bar could be removed and the individual book detached.

Because of the position of the ring on the cover, books were usually placed on the shelves with their spines facing inward; completely the opposite of what we do now. This practice meant that titles were often hand written on the fore-edges of the book that faced outwards. 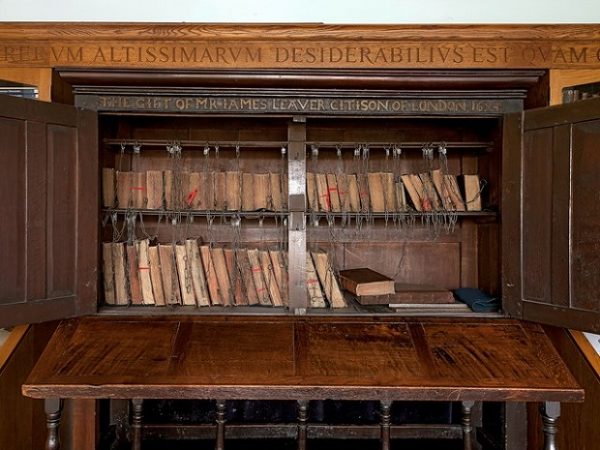 There were several different styles of bookshelves found in these chained libraries, each trying to find the most convenient way for the patron to read while still keeping the book safe. Some places had two or three shelves of books, all at waist-level or above, and then a ledge underneath the shelves where the reader could place the volume and flip through it. The Hereford Cathedral Library is designed like this. The Chained “Librije” of Zutphen has two-sided desks that act as shelves/platforms for the books to rest on and be read. 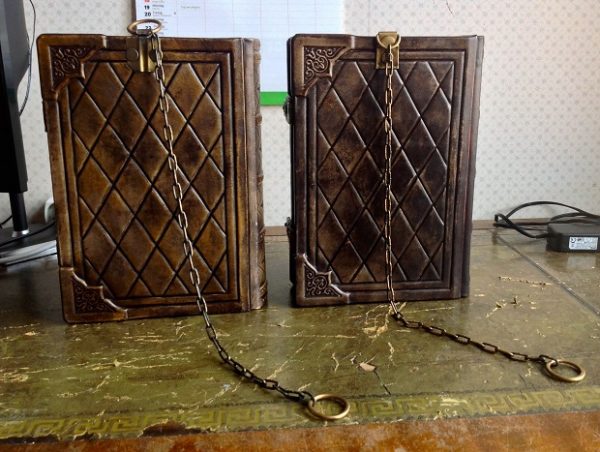 There are still a handful of chained libraries in existence, and many of them hold some incredibly rare volumes. The Wells Cathedral Chained Library has a natural history book, or Pliny Naturalis Historiae, that was printed in 1472. It also houses Vesalius’ De Humanis Corporis Fabrica from 1555, and Abraham Ortelius’ complete atlas of the world from 1606 – the earliest ever of its kind. The Hereford Gospels, which is a copy of the biblical gospel books written in Anglo Saxon characters, is the oldest book at the Hereford Cathedral Library, dating back to 780 AD. 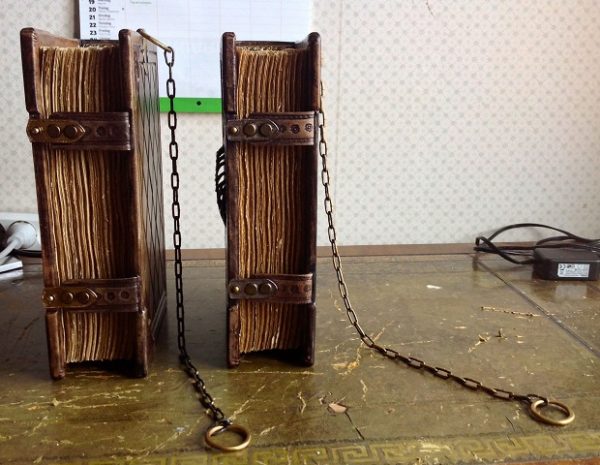 Okay, so my childhood collection of Nancy Drews, The Chronicles of Narnia, and various Archie comics maybe wasn’t as valuable as these libraries. But they were important to me, and I would have bitten the head off of any Anglo Saxon – or baby brother – who dared to come near!