Slayer, the new mini-series published by Dark Horse comics, expands on the metal legend’s music video series for Repentless, You Against You, and Pride In Prejudice. Slayer has been hailed as one of the greatest thrash bands of all time, and they now want to work with comics to accompany their newest album. This blood-bath of a comic is even more savage than the music videos, and expands on the stories in a way that adds even more hate and violence to the mix. Written by Jon Schnepp and illustrated by Guiu Villanova, Slayer explores the story originally created by director BJ McDonnell for three music videos based on the band’s 2015 album, Repentless. 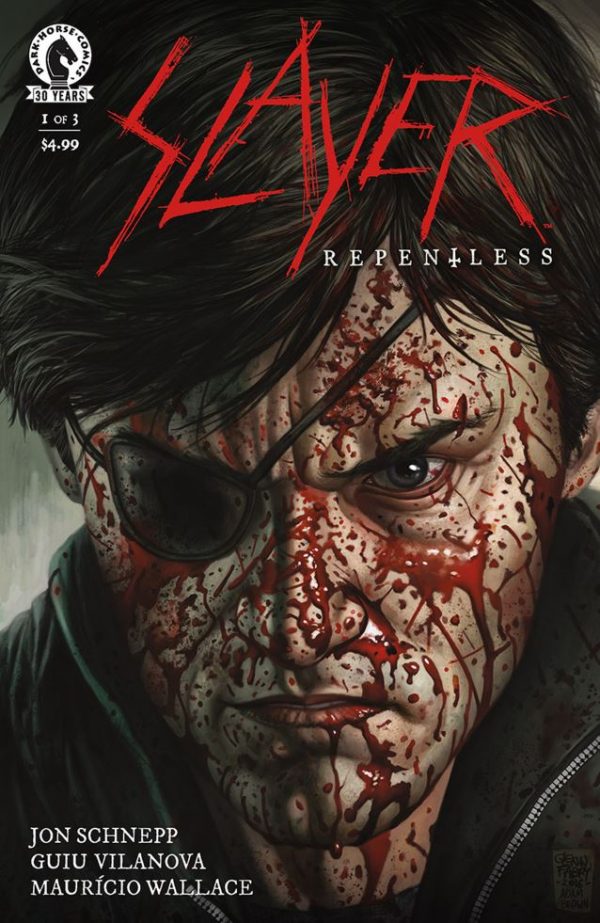 Issue one is a heavy view of the lack of tolerance in North America and how it can breed monstrous people. Two brothers grow up to be white supremacists after their parents are brutally murdered. One brother embraces the lifestyle while the other rejects it, finding a black wife and embracing her family. This does not sit well with the Nazi brother, Adrian, and after hit attempt after hit attempt, the turned brother, Wyatt, is arrested and put in prison. The next prison breakout scene is what is featured in the Repentless music video– shankings and decapitations included. On the run from the law, and his brother’s Neo-Nazi gang, Wyatt takes off with a fellow prison mate, played by Danny Trejo in the music video series. They go after backup for their blood-fueled revenge, seeking out a group of bikers that are none other than the thrash-god’s themselves, Slayer.

Although the story is told very loosely, and is very rushed, it is still entertaining. The writer, Jon Schnepp, has worked on many successful projects, but particularly Metalocalypse, an animated television comedy series about the grim life of a heavy metal band. His appreciation of the heavy metal aesthetic shines through his rough and tough script, but falls short of enough depth to take the comic very seriously. The plot moves at a very rapid pace, only stopping to see the scenes of brutal violence, similar to the rhythm of Slayer’s music. 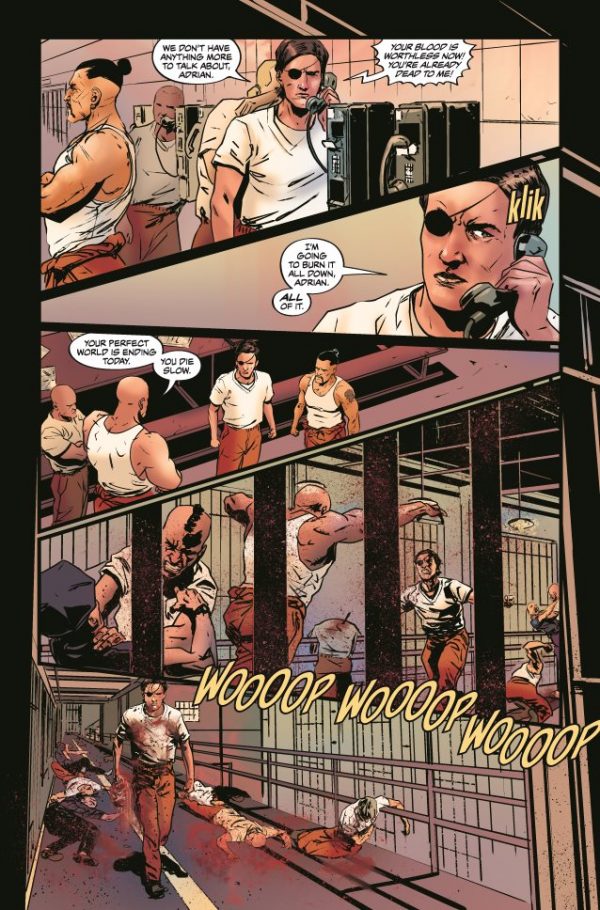 The artwork by Guiu Villanova works well with the mood of the story, but is nothing unique or special. Lots of blood sprays and motorcycles make many of the pages in this comic look badass, but some of his pencils appear to look looser than others– like some panels were rushed. The comic has a darker look than the music video, but remains so over the top that it’s shock-value moments are lost in the rapid blur of the plot. The colors by Mauricio Wallace are average, even when it comes to the high level of blood in this comic. The cover art by Glen Fabry and Adam Brown looks great, and makes this comic collectible for any fan of the band.

This comic was a brutal, heavy metal hitter, but at the price of $4.99 I would only recommend this comic to fans of the band, or fans of ultra-violent comics in general. If you are familiar with the music video trilogy, I would highly recommend it, as it expands far deeper into the protagonist’s story. For anyone looking for some kind of literary read, this isn’t it. The comic touches on serious issues of racism, but the extreme level of violence makes everything too superficial to get any real point across. Slayer: Repentless #1 written by Jon Schnepp and penciled by Guiu Villanova gets 5.5/10.

Other books you should check out:

Check out the music video that this comic was based on: