Mark Twain. The man behind the notable books The Adventures of Tom Sawyer and The Adventures of Huckleberry Finn is one of America’s most renowned literary icons. Twain died on April 21, 1910, but his books still hold respectable spots on syllabi across the country.

In the years since his death, Twain has remained an unforgettable and loveable figure of literature, and with the discovery of his unpublished fairy tale, The Purloining of Prince Oleomargarine, Twain will certainly not fade from our memories anytime soon.

Philip and Erin Stead, a prize winning picture book team, have combined forces again to expand and illustrate Twain’s fairy tale. The couple has created 11 richly written and illustrated chapters that span 152 pages. If, like me, you can hardly contain your excitement for this new project, then you can place a pre-order for the book on Amazon. 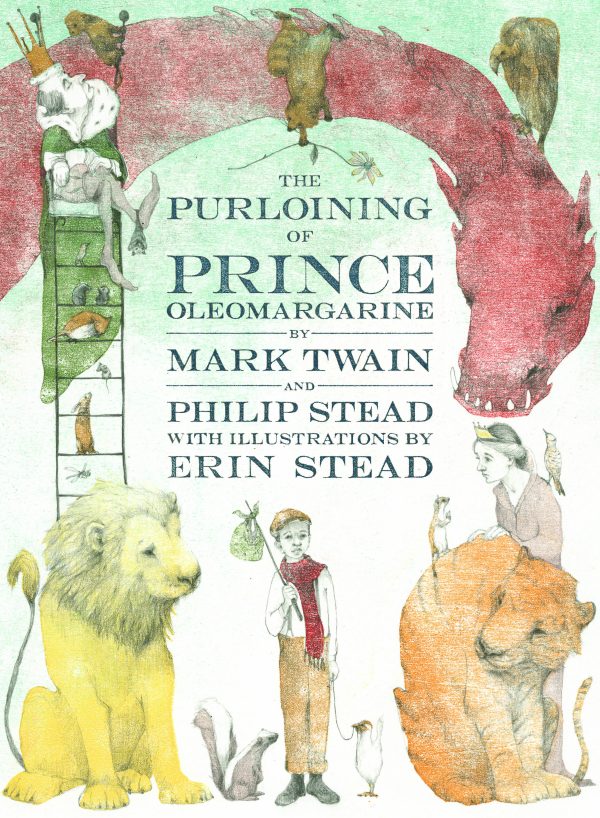 “The Celebrated Jumping Frog of Calaveras County” is the story that started Twain on the path to fame when it appeared in the New York Saturday Press in 1865. He then went on to publish his first book, The Innocents Abroad in 1869.

Many long dead figures of American literature seem to have undeserved spots in contemporary conversation, but Twain’s legacy breeds little contempt. A man ahead of his time, his writings show how he was progressive and forward thinking. Although his proper Victorian family wanted him to write like Henry James or William Dean Howells, Twain took it upon himself to write in vernacular, rather than that elevated language that was considered literary at the time. He tried out the “proper” way of writing books like in Joan of Arc, but that book is now his least read.

Twain’s writings were also humorous, then and now. Twain’s wit has stood the test of time. We still recite his humor with quotes like, “When angry, count to four; when very angry, swear,” or “All generalizations are false, including this one.”

What a great time in contemporary politics to find refuge in some timeless works of Mark Twain.