Decals, decals, decals. The more you say it, the weirder the word sounds. Try it for yourself. Decals.

Great. Now, wall decals are also known as wall stickers, wall vinyls, or even wall tattoos. They are a trend in the DIY world, as they are simple yet creative ways of decorating a room without damaging the walls or going through the hassle and sweat of applying several coats of white paint to cover previous markings.

Easy to apply, easy to remove, and definitely easy on the eyes. Read along to check out these six wall decals and seven posters (for those who prefer paper over vinyl) that any bookworm would thoroughly enjoy seeing in a room.

If you love his stories of turtles and cats,

This Dr. Seuss decal will knock ya right off your pants! 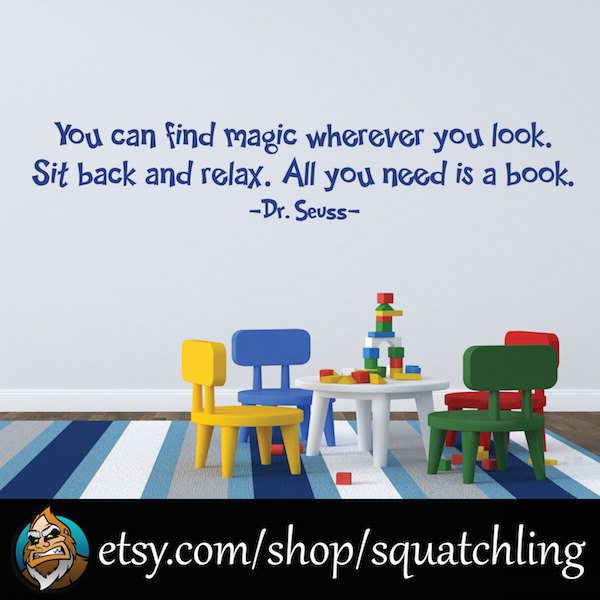 J.K. Rowling filled our lives with magic within the first couple of chapters of a small book that would later become part of one of the most groundbreaking sagas ever written. May this quote serve as inspiration for writers and bookworms of all ages. 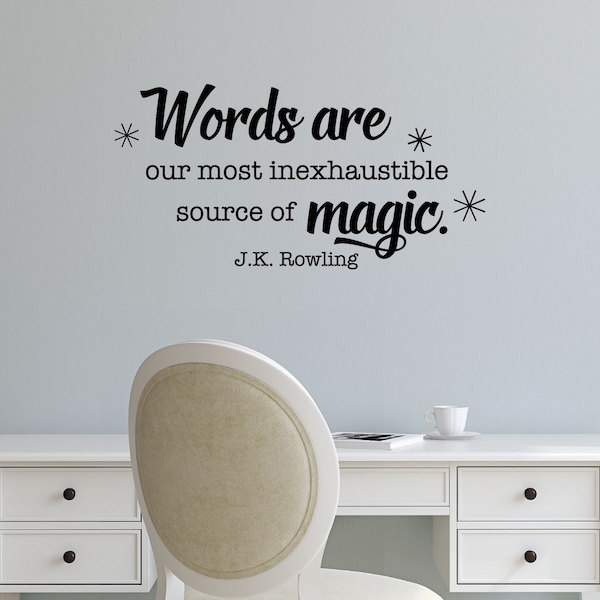 I have yet to understand why a biographical movie about this man has not reached the big screen. He lived a truly remarkable, fascinating life, and if biographical films seem to be the trending factor in Hollywood, his story is absolutely perfect. Who would be your ideal casting option to play C.S. Lewis? 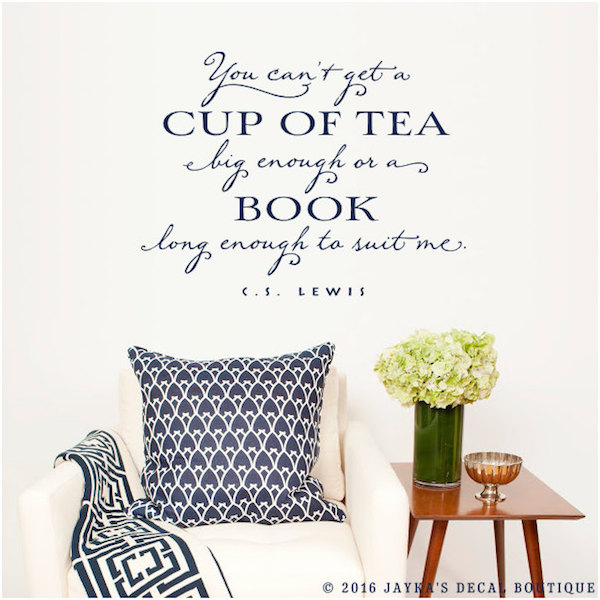 These are among a few amazing British authors for bookworms who specialize in British literature. This decal would certainly be fitting in a personal library or living room. 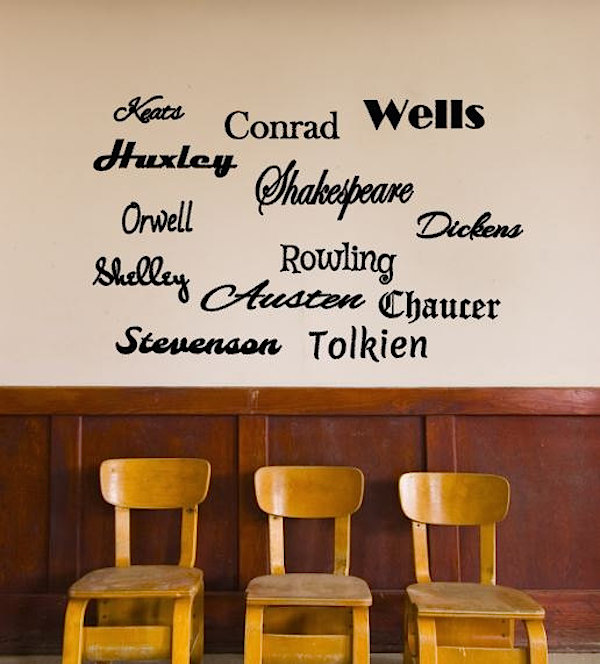 5. Calvin and Hobbes Reading a Newspaper

Ah, Calvin and Hobbes. This may be one of the few moments where they actually stay still and aren’t visibly planning (or participating in) random shenanigans. 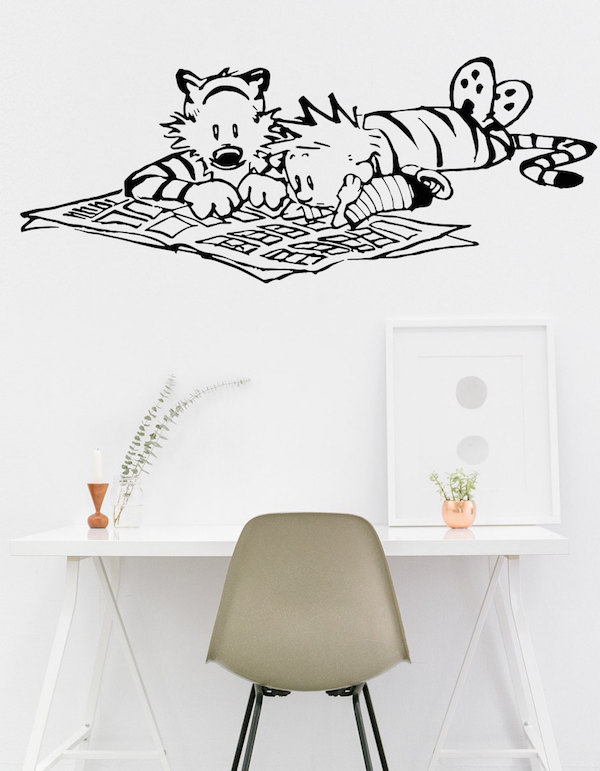 6. Alice Falling Down the Rabbit Hole

Lewis Carroll fans, it is your moment to shine.

If you are the type who has seen the movies but has yet to read the novels (such as myself), this could very well be an excellent reminder to tackle your To-Be-Read list. 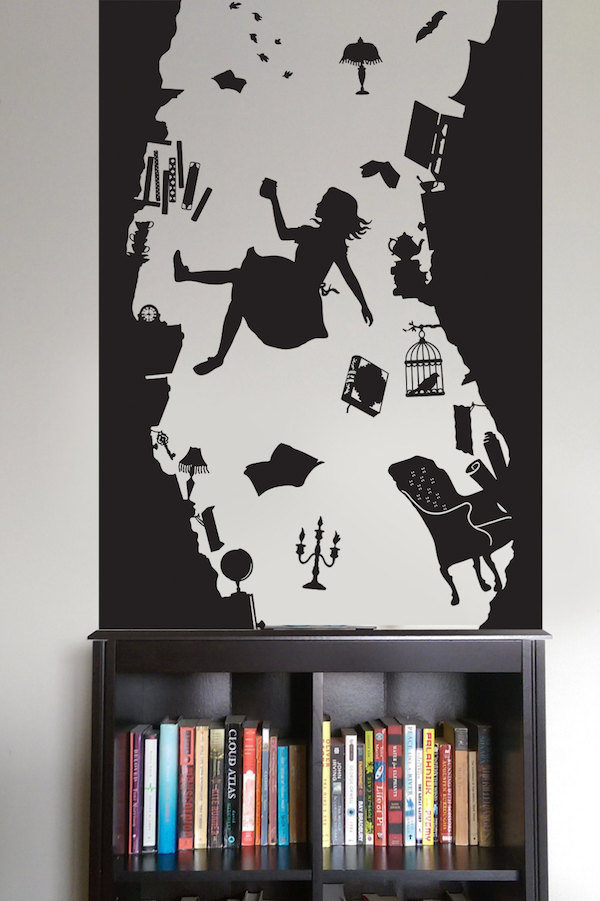 We move onto the poster territory with a quote from Shakespeare’s comedy, As You Like It:

“The fool doth think he is wise, but the wise man knows himself to be a fool.” 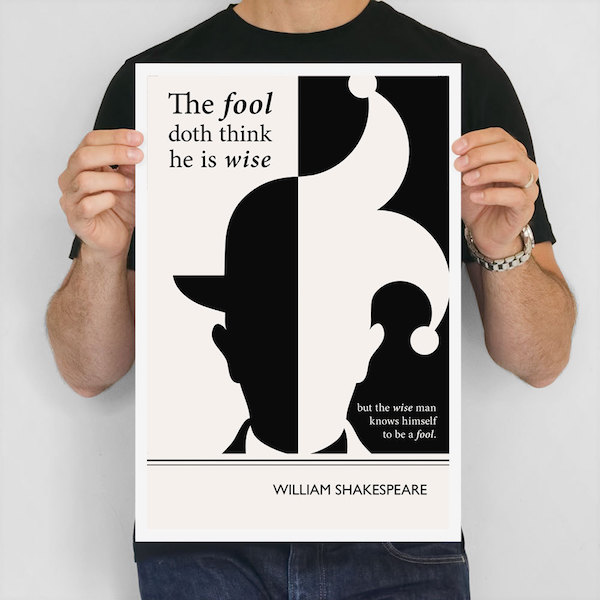 8. The Call of the Wild (Jack London) Art Print

Also the author of White Fang, The Sea Wolf, and To Build A Fire among many more, Jack London’s most celebrated novel is oftentimes said to be The Call of the Wild. Now one can admire its cold, solemn poster representation while drinking a warm cup of tea, coffee, or chocolate. 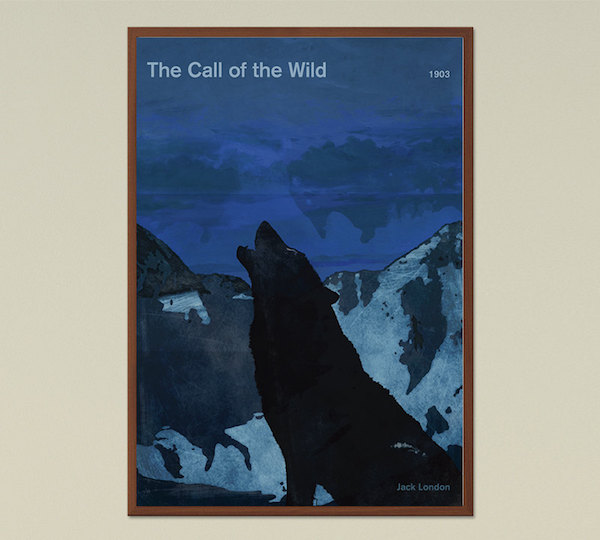 Henry David Thoreau is another subject who should have an updated biographical film, what with his two-year retreat in the forest. He wrote and embodied the quote below throughout his entire life, urging others to find their own path in the world regardless of unreasonable societal norms. 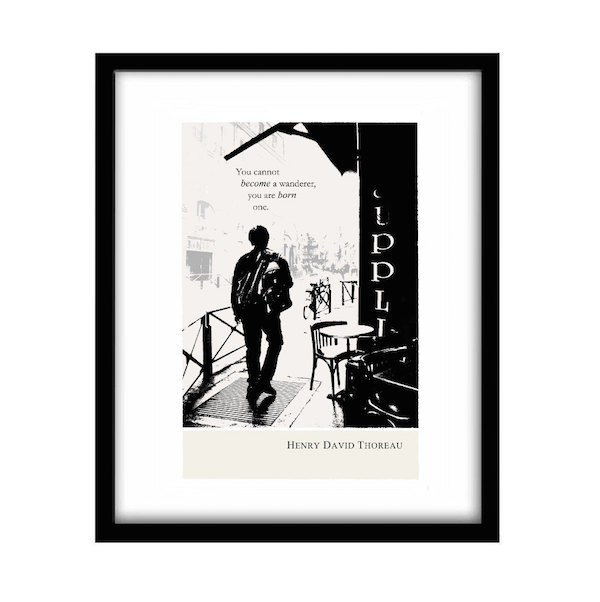 For the more minimalist decorator, sometimes one does not need a quote from a well-known writer; sometimes all one needs is the beauty in simplicity. 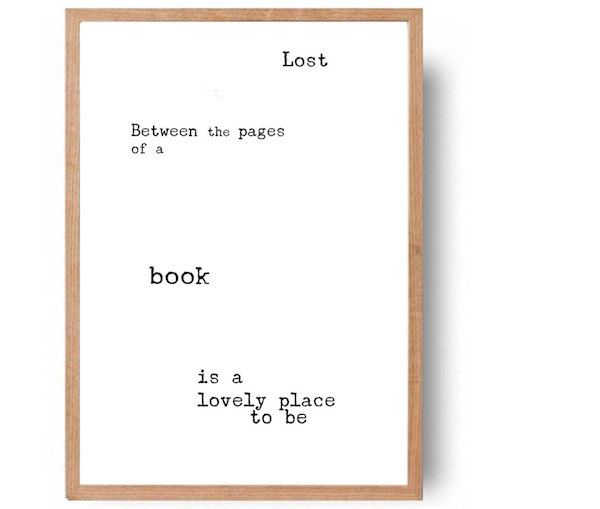 11. Do Not Go Gentle Into That Good Night (Dylan Thomas) Quote Art Print

My brother always found it frustrating that Dylan Thomas’ narrated version of the poem does not seem to match the words he wrote. Apparently the tone Thomas went for was dull compared to the life and fiery determination one gets when the poem is read inside one’s mind. 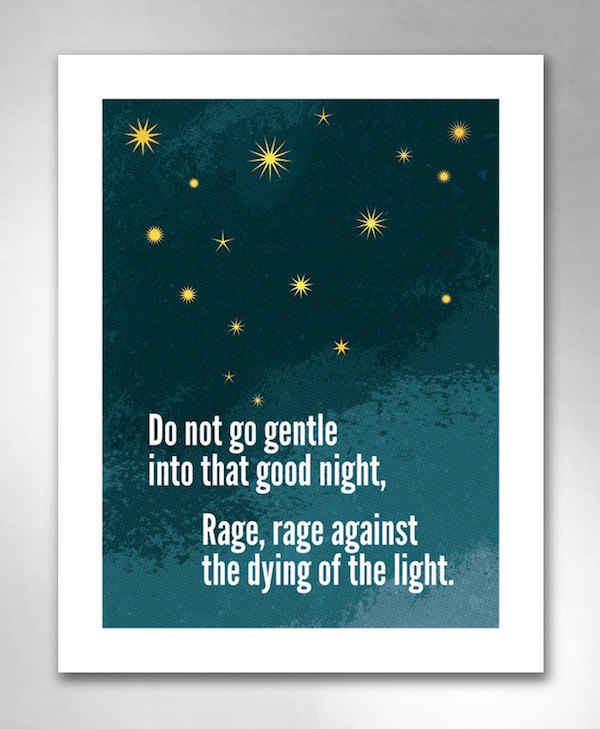 I don’t know about you, but after reading Invictus for the first time last night, I imagined myself in a riding into battle with a, “THIS IS SPARTA!” mentality. It may be interpreted as an act of defiance and perseverance against the struggles in life; a reminder that your life and your choices are only yours to decide. 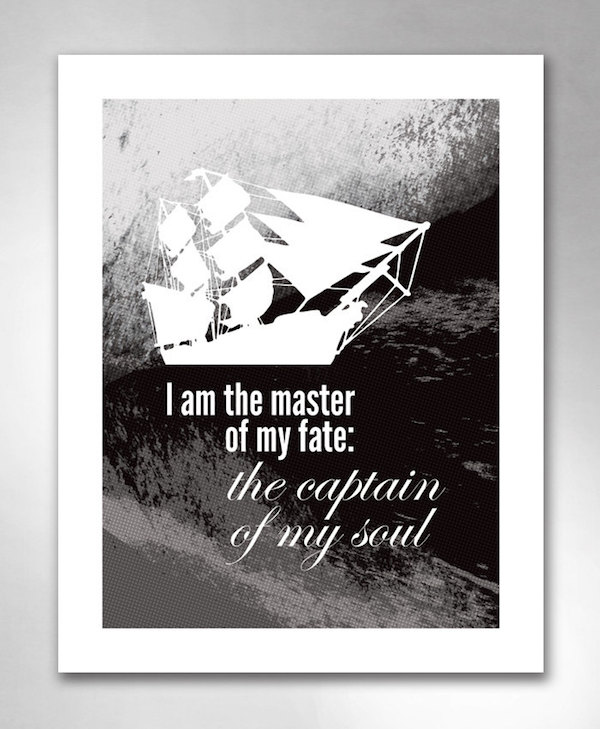 Covering the grounds of hell (Inferno), purgatory (Purgatorio), and heaven (Paradiso), Dante’s Divine Comedy shaped and inspired hundreds of art pieces and further written works, earning a highly respected title in the world of literature. The art print below hints at Paradiso, the final destination after a long, tiring journey. 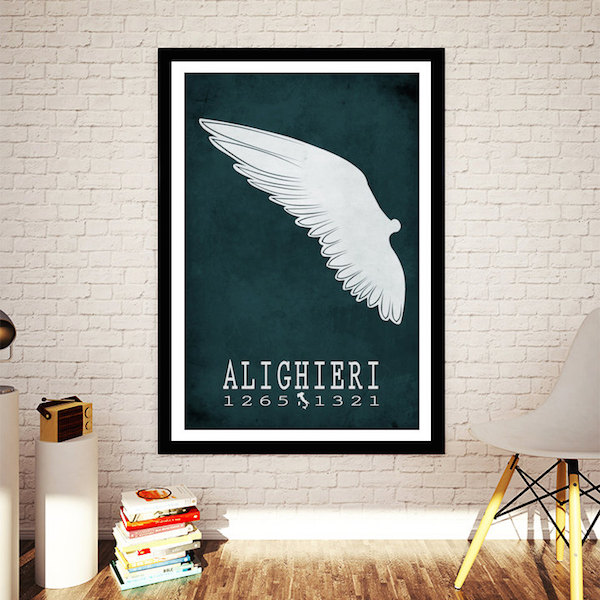 Posters and wall decals are merely a few of the many ways a bookworm can project themselves and their reading preferences in their home. Shhh. If you listen closely, you’ll notice that your blank, empty walls are begging for a bookish makeover. Listen to the walls, my friends. Listen to the walls. 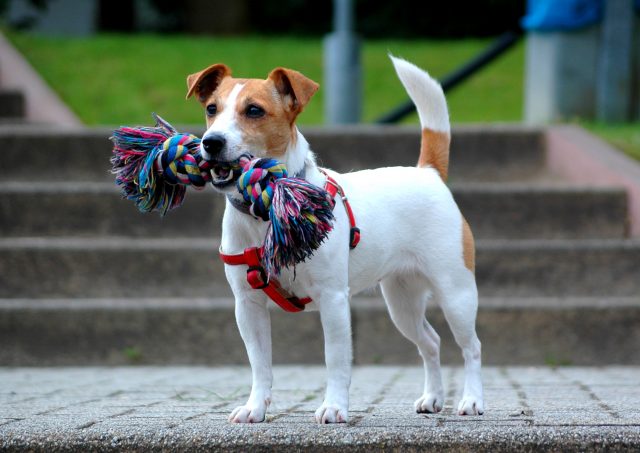