There’s a little country in the middle of the Pacific Ocean, part-way between Hawaii and Australia, seven degrees north of the equator. Few have ever heard about the tiny group of islands that form the country; those who have, know it only for its infamous Bikini Atoll where the United States tested the hydrogen bomb in 1954. They’re called The Marshall Islands, or Republic of the Marshall Islands (RMI). 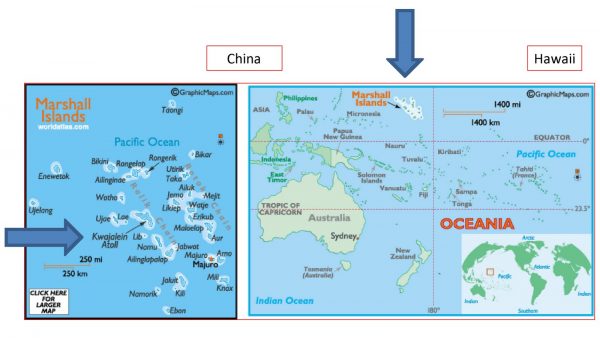 For many years, scientists have been warning anyone who will listen that climate change is a problem we shouldn’t ignore. Some politicians and celebrities have taken up the cause and heeded these warnings. There are still a great many people who don’t see the danger, simply because they aren’t seeing it first-hand. This is not the case with the Marshallese people, who are experiencing the effects of climate change in a profound way. Their islands are literally disappearing beneath the ever-increasing tides.

These islands are barely above sea level — many of them only six feet above — and are already experiencing the harsh effects of the ocean’s rising waters due to global warming. With low elevations on all the islands, there’s no escape from the relentless, demolishing waves. Environmental experts say that if the earth warms another 2°C, the oceans will rise enough to swallow this tiny country. It’s something that scientists say the Marshallese people could very well see happen by the year 2100 if things don’t change. 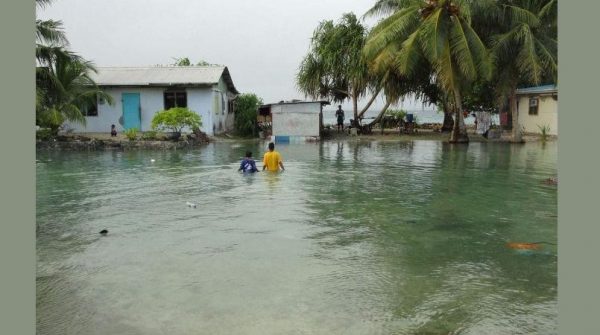 The islands are so tiny, so far off the beaten path, that it’s difficult for their voice to be heard on this matter. Something that poet, writer, teacher, and activist Kathy Jetnil-Kijiner hopes to rectify. Her poems and constant activism for environmental reform have received global acclaim, earning her a spot at the United Nations Climate Summit in 2014.  Her poem, “2 Degrees” has been featured on CNN’s special series, “Two°.”  she performed “Dear Matafele Peinem” at the Climate Summit, putting hers, and the Marshall Islands’ name on the lips of world leaders as they were moved to tears by her passionate and poetic voice.

Kathy has been the tireless voice of the Marshallese people, who are most affected by an ever-warming atmosphere.

“Climate change is a challenge that few want to take on, but the price of inaction is so high,” says Kathy. “Those of us from Oceania are already experiencing it first hand. We’ve seen waves crashing into our homes and our breadfruit trees wither from the salt and drought. We look at our children and wonder how they will know themselves or their culture should we lose our islands.” 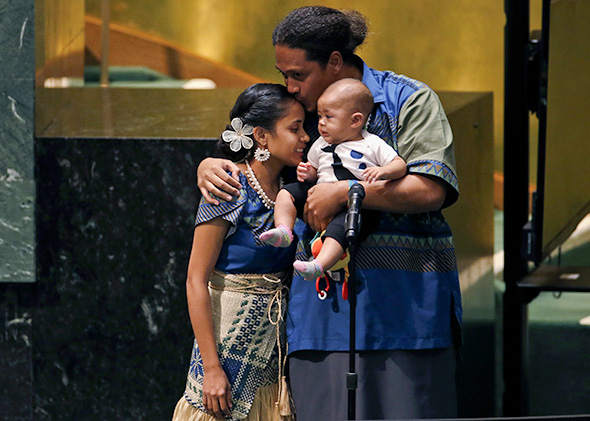 Despite the moving speech by Kathy, little was done at the summit. But she presses on. In her poem performed at the summit, Kathy promises to continue to fight for the environment:

” we are drawing the line here
because baby we are going to fight
your mommy daddy
bubu jimma your country and president too
we will all fight
and even though there are those
hidden behind platinum titles
who like to pretend
that we don’t exist
that the marshall islands
tuvalu
kiribati
maldives
and typhoon haiyan in the philippines
and floods of pakistan, algeria, and colombia
and all the hurricanes, earthquakes, and tidalwaves
didn’t exist
still
there are those
who see us
hands reaching out
fists raising up
banners unfurling
megaphones booming
and we are
canoes blocking coal ships
we are
the radiance of solar villages
we are
the rich clean soil of the farmer’s past
we are
petitions blooming from teenage fingertips
we are
families biking, recycling, reusing,
engineers dreaming, designing, building,
artists painting, dancing, writing
we are spreading the word
and there are thousands out on the street
marching with signs
hand in hand
chanting for change NOW
they’re marching for you, baby
they’re marching for us
because we deserve to do more than just
survive
we deserve
to thrive”

She received a standing ovation. She’s since been featured on Huffington Post, The Guardian, Al Jazeera, and has been invited to many climate change rallies and events. This February 14th, Jetnil-Kijiner’s first book, titled, Iep Jaltok: Poems from a Marshallese Daughter (Sun Tracks) will be available on Amazon. The book makes history as it is the very first published work of poetry written by a Marshallese author.

Check out her blog, where she has a treasure trove of poetry and other writings that you won’t want to miss. (Here’s a direct link to my personal favorite of her poems, “2 Degrees.”