If one of your New Year’s resolutions was to travel more, then why not go someplace a bit more exotic than Florida, and instead combine your love of literature with your thirst for vacation? Instead of a theme park, how about a Disney World of books? Here are eight literary hot spots to check out all over the world:

What would Disney World be without the Wizarding World of Harry Potter? Well you can’t get any closer to the literary version of the Wizarding World than Livraria Lello. Located in the Clérigos neighborhood in Porto, Livraria Lello is a 110-year-old bookshop that looks more like a church than a bookstore. Complete with spires and a Gothic-style facade, this old world shop, known as a “cathedral” for art and literature, features a massive interior space with columns, medieval decor, a stained glass ceiling and a blood-red spiral double staircase. If it looks familiar to you, there’s good reason for that—Livraria Lello is where J.K. Rowling drew her inspiration for Hogwarts! She was a regular customer there when she taught English in Porto in the early 1990s. 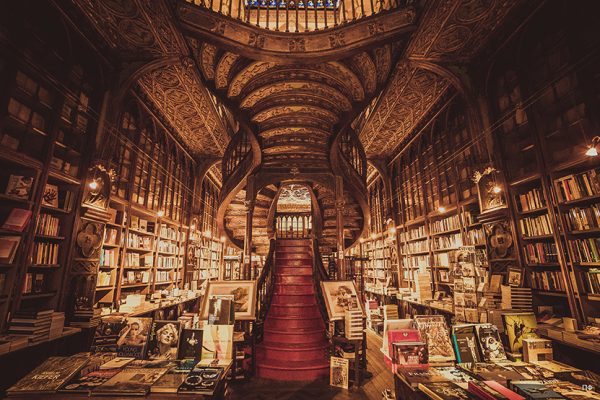 In the middle of a colorful vacation paradise, follow a whitewashed staircase that leads down to the stone doorway of a hobbit-like den. Welcome to Atlantis. Opened in 2004, this quirky bookstore houses thousands of titles on the island that legend claims to be the lost city of Atlantis. Located on a limestone cliff above the Aegean Sea, Atlantis Books has become a cult destination for travelers seeking a place to relax and read. The space also holds literary festivals, music performances, a film festival, and even a tzatziki competition. 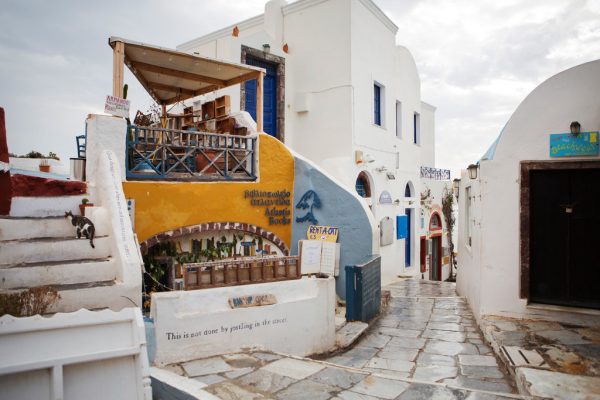 This legendary Paris bookstore offers visitors the unique chance to step into a time capsule, with its antique typewriters and age-worn books. Shakespeare & Company was established in 1951 by George Whitman on the site of a medieval monastery, facing the Cathedral of Notre Dame. It is currently owned by Whitman’s daughter, Sylvia, who recently renovated the ground floor to give prominence to contemporary authors. There is also a Shakespeare & Company Café where visitors can have the full Parisian experience—getting to sip cappuccinos under shelves of vintage books. 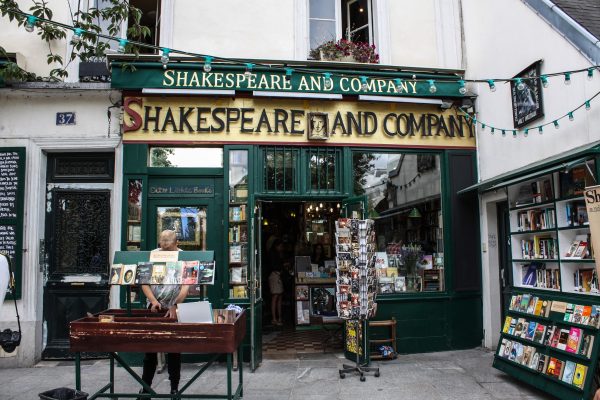 Zhongshuge Bookstore serves as both a contrast and a breath of fresh air in the booming tech hub that is Hangzhou. Its high-design space is filled with optical illusions, serving as more of an art gallery than a standard bookstore, in hopes to attract millennials and younger readers. It’s clever use of shelving and mirrored ceilings make the stacks of books look as though they extend impossibly hide and wide. There is also an amphitheater-like room for readings and lectures, as well as a playful kids room with animal-shaped chairs and bookshelves shaped like a roller coaster and pirate ship. 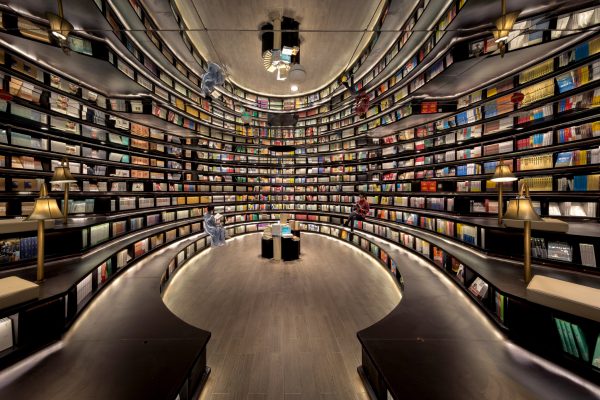 El Ateneo Grand Splendid was once a theater that later became the first cinema in Buenos Aires to show “talkies” and even had its own radio station, LR4 Radio, in 1923. What were once balconies and box seats for an audience supported by pillars are now lined with books and comfy reading chairs. The stage is still in tact, but now houses a cafe where visitors can read while enjoying snacks or coffee. 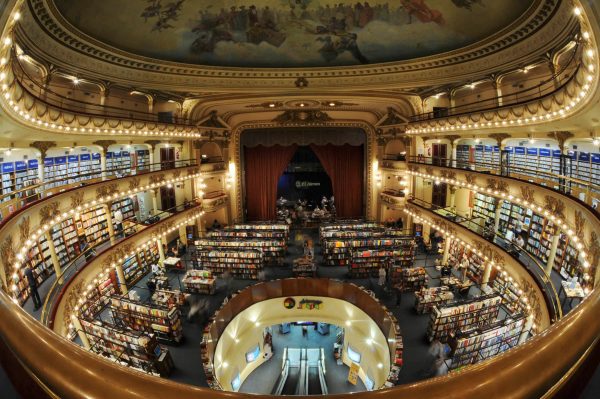 Located in the seaside village of Kalk Bay, this quaint hamlet features funky boutiques, fish and chip shops, and quirky bookstores. Kalk Bay Books is the quintessential indie bookstore—a spiral staircase leads to a loft overlooking the spaces with tons of secondhand books and vinyl records. This literary hub hosts many readings and musical acts. Down the street from Kalk Bay Books is Quagga Rare Books and Art, which is a collector’s delight, acting as more of a museum of quirk than a standard bookstore—the few spaces that are not filled with books instead have whale ribs, giraffe skulls, old playing cards, warthog tusks, and more. The shop specializes in not only rare and obscure books, but also vintage South African art. 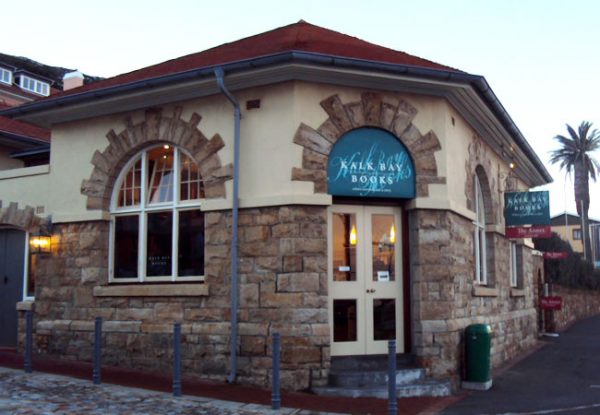 Munro’s Books’ neo-classical building design makes it feel like you’ve stepped into an ancient temple. Originally opened in 1909 as a Royal Bank of Canada Branch, it was owned by Jim Munro (ex-husband of Nobel Prize-winning author Alice Munro) from 1963 until 2014. The space still has much of its original decor, which includes gorgeous wall hangings and giant windows by Canadian textile artist Carole Sabiston. 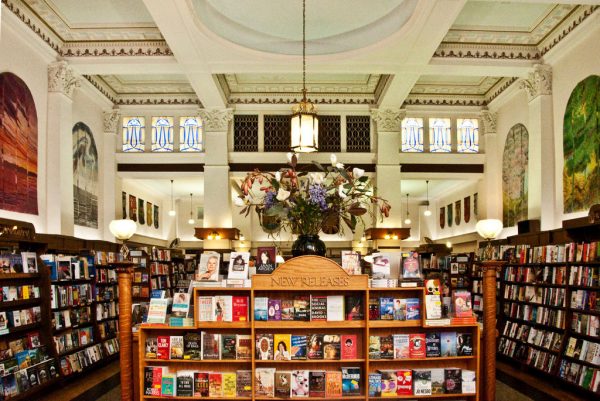 El Pendulo is what is known in Mexico City as a “cafebrería,” which is a cross between a “café” and a “librería,” meaning you can buy books as well as snack foods and coffee. Bookshelves stretch high up the walls of this double-height atrium, with a curvy staircase that leads to a second floor gallery. It features simple decor, teal accents, and a PVC roof that lets in natural light. In addition to the many Hispanic-language books on sale, visitors can also find many English-language books, graphic novels, and vinyl records. The space encourages comfortable reading and browsing, making it feel more like a library than a bookstore. 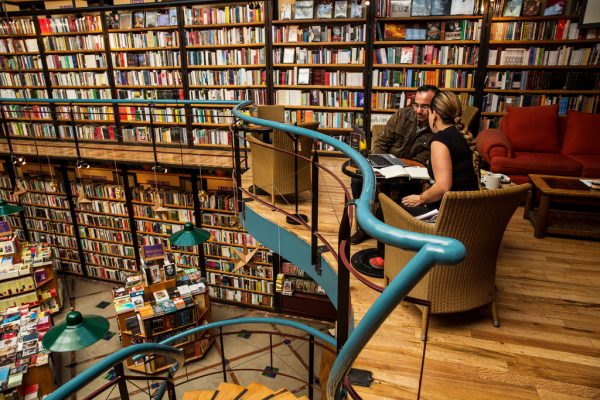 What is your favorite literary destination?

Featured Image via The Guardian