“Parents are just uncelebrated rock stars – we stay up late, take drugs and treat our bodies like crap. Yay!”

In the tradition of Allie Brosh’s Hyperbole And A Half, (both books being released within months of one another) comes Amber Dusick’s Parenting: Illustrated With Crappy Pictures.

Even though I’m not a parent myself, I found Dusick’s book to be filled with, not only hilariously drawn ‘crappy’ pictures, though realistic persepctives and experiences with all things parenting.

To put it simply, I loved this book.

I love the way Dusick writes (and ‘crappily’ illustrates) so authentically and also that she doesn’t seem to try to censor anything, hence the following two quotes from the book:

“Putting a disposable diaper on a baby with diarrhea is kinda like putting your thumb over the end of a garden hose.”

“But enough about my superficial complaints. Who cares, right? My body made PEOPLE. I’m like a wizard. Wizards don’t need perfect bodies because they wear robes. I have a robe.”

The only thing about this book that may be a con is that if you’re not a parent, you probably won’t be able to relate to the misadventures and experiences that the author describes (unless you’re a very hands on aunt, uncle, godparent, etc.) However, just because you don’t have children of your own, or maybe even don’t want kids, doesn’t mean that you won’t laugh out loud at this one. 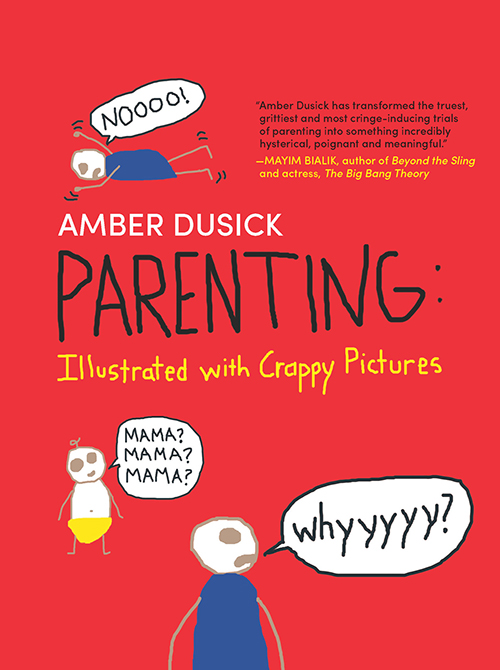 That’s one of the very reasons by Parenting, and similar books like it, are so appealing. You don’t have to have experienced every detail of the author’s life to appreciate its humor and authenticity.

Also, if you aren’t exactly the Picasso in your family or group of friends, this 224 page book (the pages are fairly short and are accompanied by plenty of pictures/drawings), will help you feel so much better about your lack of drawing skills. (Hey, not everyone is born to paint the next Mona Lisa and that’s completely alright!)

This would be a fantastic gift especially for your friend(s) who may have their hands full with little ones. I’m sure they’ll enjoy it!