Bibliomania. It’s the kind of word that you might expect would be tossed around during a massive book release. It could be a word onlookers whisper when they see the curling lineup for George RR Martin’s Winds of Winter. Bibliomania is defined as a passionate enthusiasm for collecting and possessing books, and goes a little deeper then just getting your hands on the next Harry Potter.

Picture it: St. Petersburg Russia, 1869. A extraordinary librarian by the name of Alois Pichler is hired by the Imperial Public Library. A few months into his employment, Pichler begins acting strangely. He drops books near the entrance, hurrying to put them back on the shelves, he refuses to remove his bulky overcoat, and he leaves the library several times a day. At the same time, books are going missing from the library. By March 1871, over 4500 books have disappeared, and Pichler is put on trial for theft.

The only defense his lawyer can create is the idea that Pichler was not in control of his own actions. Rather, that he was taken by a mental instability called Bibliomania, compelling him to hoard thousands of precious books.

By 1871, Bibliomania was not a new idea. The concept had been around since the late 1700’s. One scholar suggests that it reached it’s height in England and Paris in 1789. After the French Revolution of 1799, French aristocrats sold their estates to leave the country. Thousands of French books flooded the marketplace, creating a buying frenzy.

The leading text from the time on this phenomena was Bibliomania; or Book Madness by Reverend Thomas Frognall Dibdin, published in 1809. It offers the most famous descriptions of Bibliomania along with fictional dialogues based on conversations with true collectors. While it is not an official medical condition, Dibdin describes Bibliomania very convincingly with medical language. According to him, persons affected by this pseudo-illness are most obsessed over books that are first or true editions, black letter printed, with pages uncut to a single smooth edge, illustrated copies, unique copies with morocco or silk bindings, and copies printed on vellum. 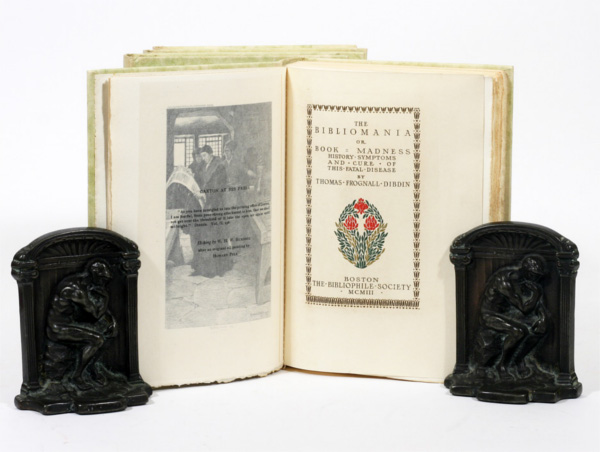 There are several reasons why one might fall into this mania. It may begin as a desire to preserve heritage, or to use the purchase of books as a symbol of wealth and power. In some cases, people collected because they liked a particular type face. A calligraphic type known as Black Letter was very popular. There is also the simple desire of wanting to possess as many books as possible.

Dibdin’s book offers several rambling examples of people taken by the mania. While they are a work of fiction, they are close enough to true accounts of Bibliomania. Middle class people of the time reading the book would know at least one person who fit one of Dibdin’s descriptions. One such case was that of a wealthy man who was overtaken by Bibliomania when he was introduced to a library filled with rare, antique books.

There are several true accounts of Bibliomania that have survived history to make Dibdin’s book seem less like straight fiction and more like a dramatic retelling. There was one English collector who had no less than eight houses all bursting with over 146,000 books! Another collector was obsessed with vellum manuscripts and nearly put his family in debt trying to have a copy of every book ever published. 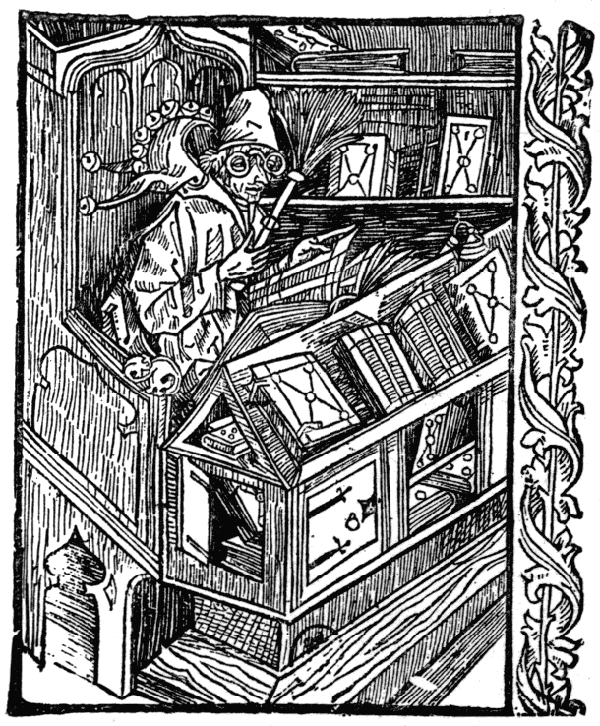 Thankfully, technological advances of the printing press made books more available to the masses, and cases of Bibliomania became fewer and farther between. Today, Bibliomania has been linked to hoarding and Obsessive-Compulsive Disorder (also known as OCD).

While most book lovers can appreciate a well stocked library, there was one heartbreaking fact in the midst of Bibliomania. The poet Robert Pearse Gillies wrote in his 1851 memoir, “There had sprung up a kind of mania for purchasing black letter volumes, although the purchases themselves from year’s end to year’s end did not read, far less write, fifty pages consecutively.”

In the midst of Bibliomania, many collectors lost the point. Books are not meant to only be possessed. Books are meant to be read.

Do you know someone who suffers from Bibliomania?