Carrie Schneider is a Brooklyn-based artist whose most recent art exhibition, “Reading Women,” has been on display since late October in the Granoff Center for the Creative Arts at Brown University. “Reading Women” is exactly as its name states—at its most basic, it is a collection of over 100 large, framed photos and video clips of women reading books by female authors. However, the simple format actually showcases complex ideas about how women are often forgotten and under-recognized in the canon of art history and literature. 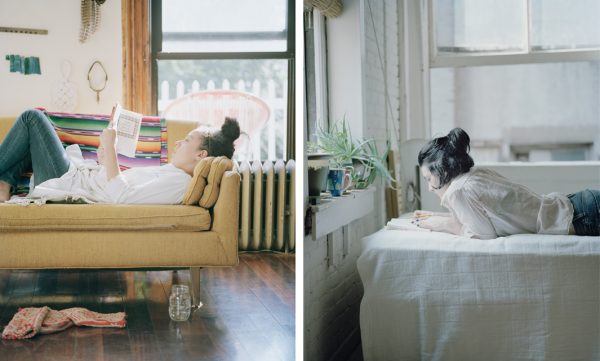 When she began working on “Reading Women,” Schneider read a number of studies that detailed the overwhelming maleness of prominent authors. But it doesn’t just begin and end in the literary arts; motivated by Linda Nochlin’s 1971 historical text Why Have There Been No Great Women Artists?, Schneider began shooting her project in 2012, the same year that a mere four percent of the artwork in New York’s Museum of Modern Art’s Permanent Collection Galleries were created by female-identifying artists.

Schneider chose art as her format to speak about this gender-based discrepancy. She asked friends and colleagues who were also artists (including visual artists, musicians and writers) who lived in New York to sit silently while reading a book of their choice in their own home or studio for a couple of hours. While they were reading, she took their photos often near a window for a natural look without the use of artificial lighting. Schneider used long portrait lenses to keep a distance while shooting to not disturb the women. This longer duration of time spent with her subjects also helped to create more relaxed, natural portraits. Each photo was purposefully shot indoors so viewers would think “about how interior spaces are viewed as traditionally feminine, and kind of (allow) that to be powerful,” Schneider said. Each portrait is titled after the sitter, the author of the book they are reading, the title of the book, and the publication year.

Schneider hopes that her piece will cause people to stop and think about the disparity of women in the arts. Schneider told Slate that “The history of representing women is so fraught. Representing each woman doing something intellectual, of their own volition, in their own self-defined space was my starting point, as an attempt to do the woman justice in the portrait.” 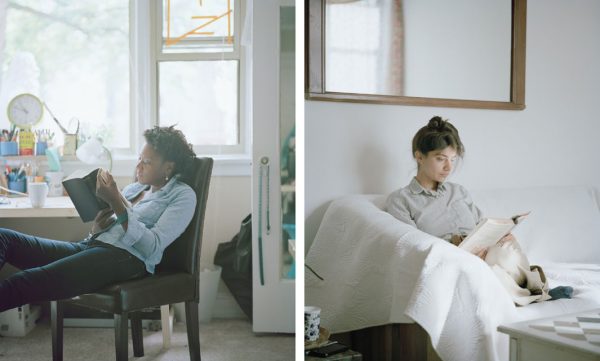 “Reading Women” is installed in the bottom floor of the Granoff Center, a location that has proven to be well-suited for artwork. Sophia LaCava-Bohanan, the program coordinator at the Granoff Center, states that “the cafe tables and chairs that are often in the gallery space are frequently used by both members of the academic community, as well as the broader community for meetings and a lot of homework. To see the projection of reading women in that space—and the act of female artists reading prominent female writers—reflected as Brown University students (are) doing the same thing … (is) particularly interesting.” LaCava-Bohanan hopes that this installation will allow students to reflect on their own participation and development of art history—especially the way females are represented through art. Likewise, Schneider hopes that this exhibition will cause people who see it to slow down and take in a part of life that is still relevant even as technology provides alternative ways of reading books.

“We are entering the era of the end of the printed page!” Schneider says.“I think there is something physical, visceral about reading a book that is unlike anything else. And again, there is something rare about the depth of concentration that can be experienced while reading. Living in a culture obsessed with speed, ‘progress,’ consumption—these moments of pure immersion, belied by stillness, are rare, political, and powerful.”

“Reading Women” will be on display in the Granoff Center through Dec. 5th.