For most American children, books are easy-to-come-by resources; libraries are in neighborhoods and schools for simple browsing or borrowing, tablets and e-readers are purchased as gifts, and local bookstores are merely a hop, skip, jump or click away. Reading classes are taught in schools and we have the ability right at our fingertips to read millions of English-language titles. It’s not difficult for us to take for granted the accessibility to literature we’re fortunate enough to have. But across the globe, over 250 million children have limited access to the same reading material that English-speaking children have.

Fortunately, that’s about to change.

The United States Agency for International Development (USAID) initiated the Global Book Fund, which sets to transform the development, procurement and distribution of books so that they will end up in the hands of children worldwide, in formats that allow for reprinting and use across borders, cultures and languages. This is not just a far-off ideal, however. Instead, the framework for promoting global literacy has already been put into motion. Erik Owens, the interim director of the Boisi Center for Religion and American Public Life, and Amie Harris, a Boston College alumnus who is now a Special Assistant to the Senior Adviser for International Education at USAID and a central figure in USAID’s pilot Book-a-Thon program, are bringing this innovative idea to life at Boston College.

On Tuesday, November 15th, Boston College will be hosting a workshop event called “Stories that Move,” which will bring a new software called BLOOM to the campus. BLOOM allows anyone to write in his or her preferred language and upload the final project—a short book—to a free digital library, where the book is then translated into over fifty languages and made available for download. This makes literature instantaneously more accessible for global consumption. Attendees will have note cards available to them to brainstorm and plan out any ideas for their stories, as well as laptops with the BLOOM software installed, so they can translate their writing and make their creative work available for the promotion of literacy worldwide. 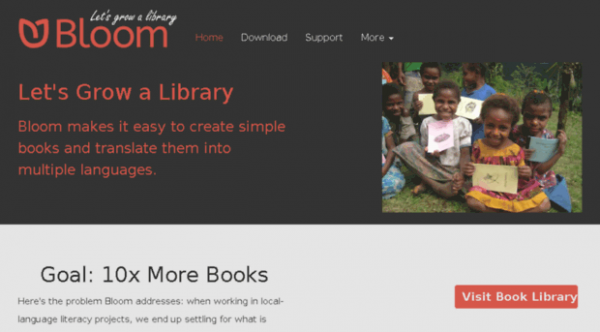 The main emphasis of the event is children’s literature, so all who participate will be working on short stories geared towards young readers, with inspiration from the keynote speakers, best-selling children’s book creators Paul & Peter H. Reynolds (Judy Moody, The Dot, Going Places). The workshop also aims to educate participants about USAID’s global literacy efforts. The cause has received support all throughout Boston College and is sponsored by the Lynch School of Education, the Morrissey College of Arts of Sciences, and the School of Social Work, as well as the Boisi Center. The Book-a-Thon is planned to be a yearly event, with a full program being launched by USAID in the future. 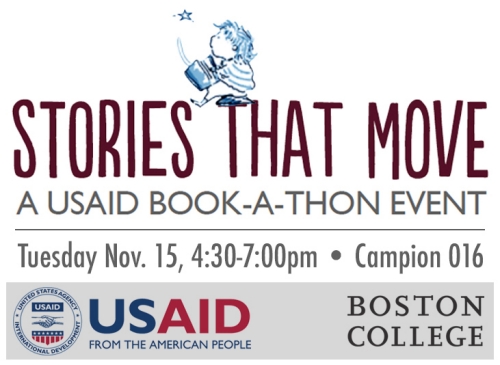 The event will be held on Tuesday, November 15th from 4:30 – 7:00 in Campion 016. Any BC students who are interested in attending this event must register, and space is limited. The event will also be promoted through a student committee and via social media campaigns, using the hashtag #BCbookathon. The Book-a-Thon takes place during International Education Week (IEW), which seeks to emphasize the importance of raising awareness of the world’s cultures, people and languages, affirming the critical role of international education.