I almost had to repeat kindergarten because I procrastinated on learning to read. Faced with this threat, I hit the books, and by the end of the year I had achieved a 5th grade reading level. I credit Bill Watterson and Gary Larson for this; I remember sitting in my dad’s apartment at ages six and seven, each of us curled up with one of his Calvin & Hobbes or The Far Side volumes. While he savored the pages, I soldiered through the multisyllabic speech bubbles, pausing every now and then to ask things like, “Daddy, what does ‘hypothetical’ mean?”

Here are just a few of the words that should obviously be in every 6-year-old’s vocabulary:

SPEAKING OF REPARTEE, this insult, though!

Some jokes just didn’t click until I grew up, but at least I learned like nine SAT words from this strip.

The more election years I live through, the more painfully funny these are.

For all the times Calvin was a pain in his dad’s butt; the apple doesn’t fall far from the tree. 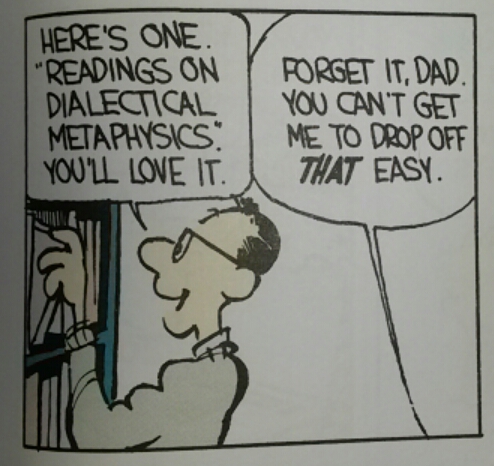 Hobbes is a gentleman and a scholar.

Moreover, he’s a gentleman who knows that being “cool” is overrated.

Biology words all up in these panels.

“Dad, what does avant-garde mean?”

I’ve never noticed this word in anything else, and it’s too bad.

Miss Wormwood struck me as a mean teacher when I was in first grade. Now, not only do I feel for her, I think she’s earned sainthood.

Hobbes is the Hermione to Calvin’s Ron. 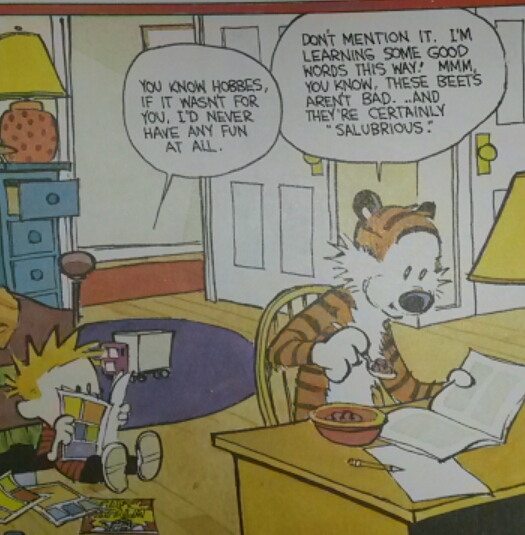 “Fiend” was another one I asked about, as it shows up in pretty much every Spaceman Spiff strip.

Before it was a metal band, it was Calvin.

This is a frequently used word with Calvin, made funnier when you grow up and realize he’s imagining it most of the time. Hey, there’s got to be a silver lining to growing up.

Panache sounds delicious, but once again it’s just Hobbes being a gentleman.

“Why didn’t he just say that?”

I glared at the unnecessarily long, Latinate word for a long, bitter moment. 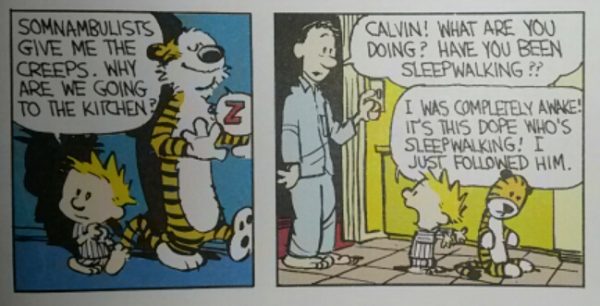 The sugar high may be a placebo effect, but placebos, after all, are effective.

Calvin’s mom must be proud. Exhausted, but proud.

My dad didn’t explain this to me. Twenty years later, LOL.

Spaceman Spiff also introduced me to the concepts of technobabble and aptronyms.

It’s hard to believe I read these at such a young age, let alone understood them, but who could be more relatable to a little kid than Calvin, Hobbes, and Susie? Context clues are everything. It also doesn’t hurt to have Dictionary Dad standing by.

Two decades and one English degree later, thanks, Dad. Your re-election campaign is looking solid.