Patrick Stewart contains multitudes. “All of these people already exist inside me. It doesn’t matter how unspeakable they are, how unpleasant. They are there, and you have to find all those elements internally,” he commented on his over 50 years of playing literary roles.

Most people know him as Captain Picard, Professor X, and one of the funniest celebrities on Twitter (a character in his own right!). These characters originated in the literary classics. Next time you’re looking for something to watch that has great acting and cultural significance, try one of the flicks on this list!

“I saw what I saw! The boy pulled the sword. If a boy has been chosen, a boy will be king!” Director John Moorman went straight to the source for this King Arthur adaptation. Sir Thomas Malory’s Le Morte d’Arthur is one of the most thorough volumes of Arthurian legend, and the film ambitiously covers Arthur’s rise, reign, and fall in its nearly two and a half hours. Sir Patrick gallivants across the screen as King Leondegrance, Guinevere’s father. Thirty years before it became official, knighthood looked great on him! 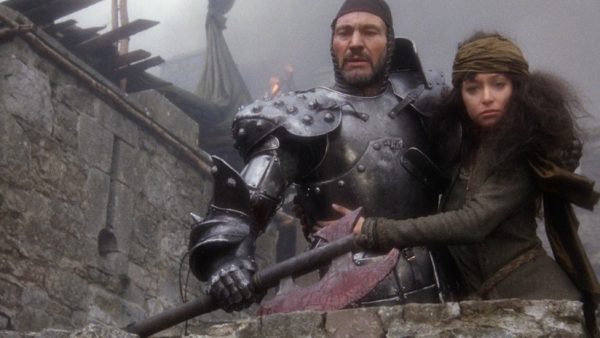 “Not in the mood? Mood’s a thing for cattle and loveplay, not fighting!” Gurney Halleck, the scripture-quoting, baliset-playing combat trainer, is my favorite character in Dune. I was afraid seeing a familiar actor in the role might take away from the character’s strength, but I had nothing to be afraid of. Sir Patrick portrays the gruff, oddly sensitive, lovable mentor perfectly, despite the fact he wasn’t the actor David Lynch intended to cast. He has also said the stillsuit was the most uncomfortable costume he ever wore, despite the fact –I hope — it was not a functional stillsuit.

“Now if these men do not die well, it will be a black matter for the king that led them to it.” Star Trek: The Next Generation gave Sir Patrick ample opportunity to display his Royal Shakespeare Company background. Indeed, between the holodeck and Doctor Crusher’s drama club, we see the cast in an array of literary settings, from Sherwood Forest to Sherlock Holmes‘s London. In The Defector, he plays both Captain Picard and Michael Williams of Henry V in the same scene, which is simply delightful. I love a little Patrick Stewart with my Patrick Stewart. 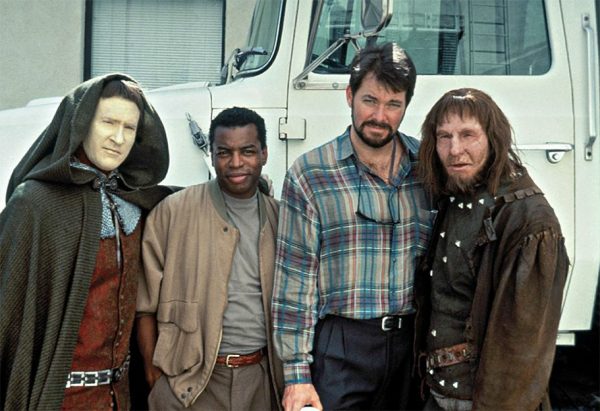 “Take him away! Put him in the Tower of London! Make him part of the tour.” His role as King Richard in this Robin Hood: Prince of Thieves spoof may be minuscule, but as usual, he brings his A-game. In a Nerdist interview, Sir Patrick confessed he would like to be remembered for being funny, and that it’s not going to happen. Horsefeathers and hooey! Bantering with Mel Brooks is a damn fine comedy debut, and he’s certainly followed up with leaps and bounds of hilarity in recent years. Yet I always knew. 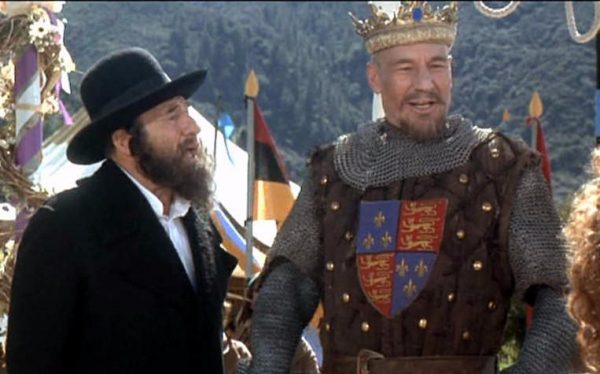 “For forever and a day I shall chase that white whale.” Speaking of Star Trek: The Next Generation, remember that epic guilt trip Lily gives Picard in Star Trek: First Contact? (“Of course I do!” Shout out to all the Trekkies, while the rest of you side-eye me.) Anyway, she calls him Captain Ahab (ooh, sick nerd burn!). Two years later, Sir Patrick stars as Captain Ahab by pure coincidence — well, aided by co-star Brent Spiner and Stewart’s own well-earned fame. 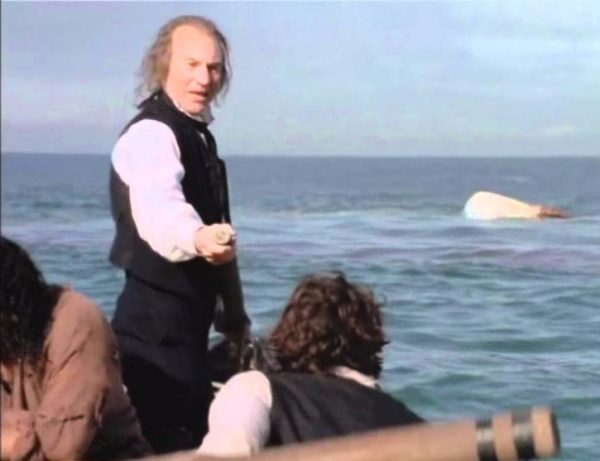 “Can you forgive a stupid old man who doesn’t want to be left out in the cold anymore? Will you take me in?” I admit, Michael Caine is my favorite Scrooge, because Muppets and singing and that one incredibly moving break-up song that Disney cut (90s kids will remember ferociously blubbering to this!). But perhaps I would change my mind if I saw the one-man Broadway production starring Sir Patrick as every character in the story. Critics have compared Stewart’s performance with readings by Dickens himself. I can think of no higher compliment. 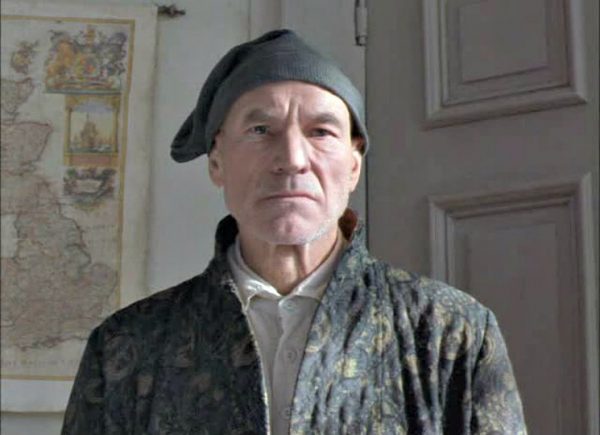 “What if this cursed hand of mine is coated with my brother’s blood?” All right, if you’re a geek, you have no excuse to skip this movie. David Tennant stars as Hamlet, opposite Stewart who plays Claudius (known to Disney fans as Scar). The stage play was adapted and presented as an episode of Great Performances, which you can watch for free. While remaining faithful to the text, Sir Patrick enchants audiences into “believing, at least for an hour or so, that Claudius is really a terrific guy.” Next up in the category of “films that will help you understand why Shakespeare is still such a big deal on so many levels.” 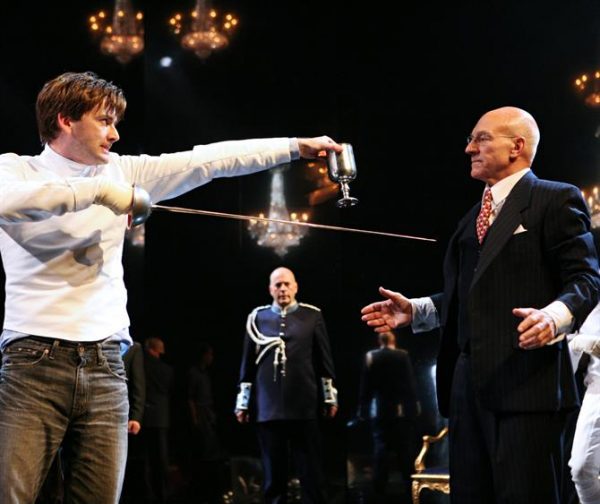 Sir Patrick’s bromance with Sir Ian McKellen charmed the Internet googoo-eyed when the duo went on tour in the U.S. to spend some time in No Man’s Land and then wait, indefinitely and hilariously, for Godot. (They are reprising their roles in London, by the way.) The X-Men co-stars and accomplished stage actors talked shop about playing the role of Macbeth, as Sir Ian had portrayed the tragic king in a 1979 adaptation. The result: it isn’t surprising that Sir Patrick is a bangin’ Bardsmith, but that doesn’t make his and his cast members’ acting any less awe-inspiring. For what it’s worth, PBS agrees with my appraisal. You can watch the film for free on their website. 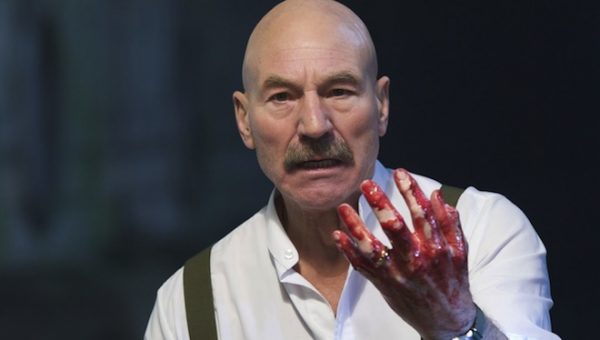 Hopefully, more of the plays Sir Patrick Stewart stars in will be adapted to film. Meanwhile, this list should tide you over if you’re unable to make it to the theater.