I read this book on a recommendation, and I was not, at first, enthused. However, my expectations were defied continually, from the publishing info on the very first page, to the little page of calmness on the last.

Theatre of the Gods follows M. Francisco Fabrigas, an old, cloaked, bearded man who is not, in fact, a wizard thank you very much, as he hops between universes on a very literal starship called the Necronaut captained by a teenage boy of the same name, in order to deliver a tiny blind green girl lately encased in ice and a very sensitive file in the form of a deaf boy named Roberto to their destiny. They are aided in this endeavor by Fabrigas’ not-quite-imaginary friend, a gentle giant, and a mysterious organization.

Their hindrances, however, are more numerous. Among the many things attempting to keep Fabrigas and co. from getting to where they need to be are:

But don’t worry. If at any time you begin to feel overwhelmed with anxiety, you can always take a moment to turn to the little page of calmness at the back of the book. 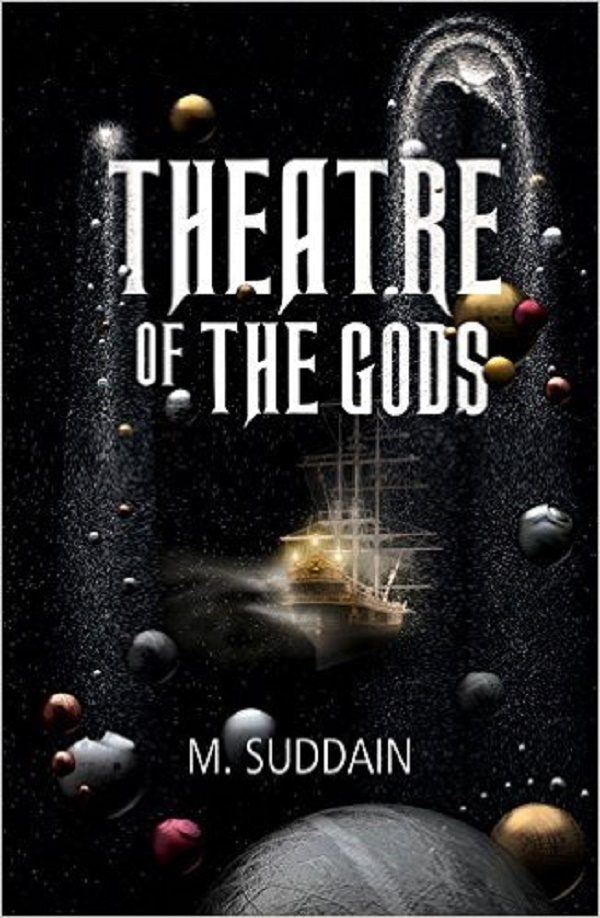 It was, for me, pure enjoyment. It toys with the notion of infinite universes by embracing the absurd. In a book unconstrained by the laws of any one universe, in which anything at all can happen, 600 pages goes by in a flash.

The characters are all rather two dimensional, but I think in this case, it works. The book is not good for the characters themselves, rather, for the way the characters react to each other and to the usually ridiculous situations in which they find themselves. Often, their lack of dimension is used as fuel for Suddain’s humor.

The narrative doesn’t follow, strictly speaking, a linear path, nor would I expect it to in a book like this, and it doesn’t always tell you when a flashback is happening. It lets you figure it out for yourself. Which can sometimes take a while. Reading this book is taking a leap of faith that it will all work out in the end. Whether or not that faith is rewarded, I’ll leave to you to find out.

You may also enjoy:

Oh, and, before I forget – homunculus.

Featured image via King of Wallpapers