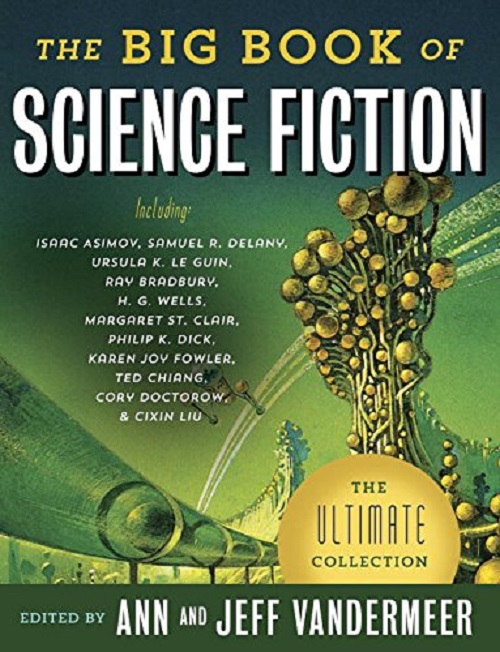 Science fiction is a popular genre among fiction readers. The Big Book of Science Fiction by Jeff VanderMeer, is quite possibly the greatest collection of science fiction stories compiled into a single book, of all time.

As suggested by the title, The Big Book of Science Fiction is exactly that, a really big book. Containing over 1,100 pages, this massive tome is an incredible contribution to science fiction section of libraries and bookshelves.

From the start of the book, VanderMeer outlines their intentions to develop a definitive definition for the term “science fiction”, a question that has long been debated in conventions, academic journalists, marketing departments and bookstores.

The definition of science fiction has long been debated. VanderMeer had read through thousands upon thousands of stories from across the genre’s history, coming to the conclusion that the simplest, and most widely accepted definition is that it is any story that contains events of the future, with future defined as anything from five minutes from now, to thousands of years.

Starting in 1897 and running all the way through to 2002, The Big Book of Science Fiction contains a long history of stories written under the genre. It includes authors such as: Arthur C. Clarke, Isaac Asimov, Philip K. Dick, Ted Chiang, Cixin Liu and Corey Doctorow.

The book contains a catalog of the ups and downs of the history of the science fiction genre. It takes readers through the various modern alterations, including efforts to introduce more women and people of different cultural backgrounds into the genre. The book also outlines some of the deepest roots of the modern science fiction genre including Frankenstein by Mary Shelly, romantic adventures from Jules Verne and other scientific stories by H.G. Wells.

The Big Book of Science Fiction also contains a large scale of stories that have only recently been translated to English for the first time! This is what sets VanderMeer’s books apart from other anthologies, because it recognises that science fiction is an internationally enjoyed and written genre.

It took three years to complete the project of the biggest book of science fiction known to man today. It is a survey anthology, a book that engulfs a wide range of examples containing the genres formula. It took a long look into the history of literature to find and select representative samples.

Did I mention that this is a really big book? It is an essential addition to any science fiction admirer and newcomers alike. Science Fiction has been given a modern redefinition by VanderMeer and is an excellent umbrella of the genre.