Well, if this isn’t the epitome of appropriate dinner attire, I don’t know what is! After 165 long and titillating years following an infamous conversation between English novelist William Makepeace Thackeray and beloved classic author Charlotte Bronte, comes the truth behind what has gone down in literary history as being one of the most crestfallen dinner parties.

Let’s travel back in time to that fateful evening of June 12, 1850 when Bronte, along with many other writers and highly-regarded citizens were invited to a dinner in Bronte’s honor. The lady of the evening wore a simple blue and white print dress with plain buttons closed up to her neck that would have deemed socially acceptable had she been going out to run a few errands or buy a loaf of bread, though this was not the case this night. In our modern eyes, we may view the above picture of Bronte’s dinner dress as a regular, elegant dress for a woman living in very much pre-jean and capris 19th century, though Charlotte was viewed as being horribly under-dressed, which was  considered a sure-footed sign that one was disinterested in whatever specific event was occurring back in those days.

Bronte was a total fangirl for Thackeray’s work and even dedicated what is perhaps her most known work, Jane Eyre to him. One can imagine the emotions she must have felt after recognizing his stark disapproval! Unfortunately, the night continued to become even more dull and disatisfying, making for an overall terrible evening. Fortunately, we have recently discovered that Bronte’s dress choice was not all that inappropriate at all! This is Historian Eleanor Houghton’s take on that fateful evening:

“We know Charlotte was embarrassed when she wore an inappropriate dress to the opera on her first visit to London, so with this in mind, I think we can be confident it is unlikely she made the same mistake twice by wearing a day dress to an auspicious evening occasion – particularly one of such personal and public significance.” 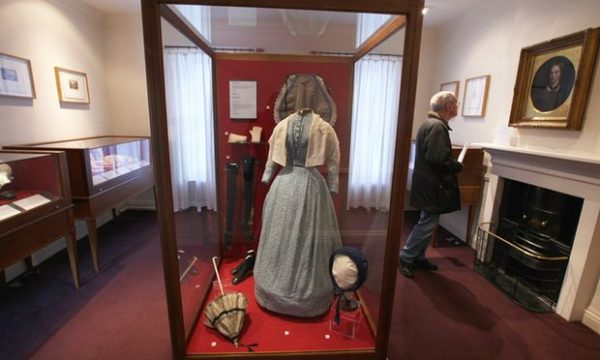 Houghton goes on the mention that with the buttons on the dress neatly enclosed to present a modest and classy appearance, there is little reason to believe that Bronte was under-dressed for the occasion, especially one that was held in her honor.

“The white and blue delaine Thackeray dress would have been the right choice for such a meeting. Its high neck, long sleeves and mid-quality printed fabric point to pretty but unassuming morning attire.”

Alas, we can finally put this Bronte dress spectacle to rest after more than a century and a half of silly speculation. At the end of the day, no matter if some still believe Bronte was under-dressed for a dinner party on her behalf, the dress sheds light on not only the clothing tastes, though the aura of a very private author.  The infamous Thackeray dress will remain a prized treasure in history, maintained and cherished for many more generations to come.