From the creator of the television phenomenon Veronica Mars, Rob Thomas continues the story from where the feature film left off.  Dive into Veronica Mars Book One: The Thousand Dollar Tan Line, narrated by Kristen Bell. Veronica Mars is a recent law school graduate, but life as a detective has pulled her back to her home town where she has set up shop with her father. 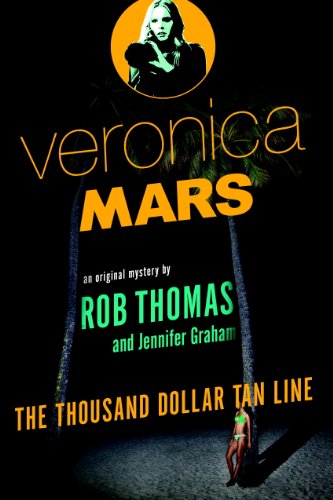 Veronica Mars fans will be pleased with the familiar tone and storytelling that appears in this book. Veronica is on the hunt to find two missing teenage girls. Her strong attitude and propensity for danger is pervasive as well are the twists and misdirections. While it did seem to lack the plethora of witty sarcasm from Veronica, disappointingly, it still made me chuckle a bit.

While I can’t say the entire plot was unpredictable, I was spot on with a few predictions of my own. The mystery is fun, simple, and satisfying. The book is a tad short, making it feel like something between an episode and an overarching season story line.

The best part of the book, however, is that it is available in audio book form. I came to listen to it for one reason: the audio book is narrated by Kristen Bell, Veronica Mars herself. Bell’s voice makes the story that much more intriguing and worth the listen. Not only that, the actresses’ gift for voices makes for impressive narration, even if she hadn’t been the person to originally bring Veronica Mars to life.

Bell brings distinct voices to not only Veronica, but to the rest of the characters as well. Each of them are consistent and recognizable. She seems to effortlessly switch between characters, going from Veronica to Keith to Wallace and back again, making the transitions seamless. While there is, understandably, a bit of herself in every character, they are each unique in their own ways, their voices taking on the vast characteristics of their personalities.

Overall, it is an extremely fun listen, even if you are not a die-hard fan of the Veronica Mars T.V. series. I highly recommend you give it a listen.